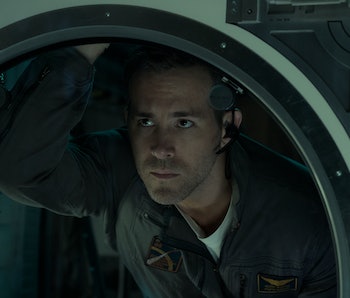 Life, the new space-horror movie starring Ryan Reynolds and Jake Gyllenhaal, is being praised for its shocking twist ending, but there a moment much earlier in the film that lets you know it’s not playing around. It’s a fairly established trope, but it’s one that lets audiences know right of the bat that no one is safe.

Spoilers for Life from here on out

Based on the trailers for Life (and, heck, the way we just described it), you’d be forgiven for thinking that Ryan Reynolds’s character Roy, a pilot on the the International Space Station, is going to be a major character. Reynolds is arguably the biggest name in the entire cast, and his fun, hyper-competent character screams “I’m a protagonist.” In Life, though, it turns out he’s just a red herring instead.

After Roy captures a space probe laden with a sample of Martian soil, a team of scientists on the ISS starts checking out a possible alien life form, which they name Calvin. Hugh Derry, the team’s biologist, gives Calvin a mild electric shock, and it reacts violently, breaking his finger in a scene that appeared in most of the trailers. Things escalate really, really quickly after that. Calvin breaks free of the space where it was being contained and goes after Hugh. Roy, being a dashing hero, rushes in to rescue Hugh. He tries to kill Calvin, but the alien lifeform crawls into his mouth and kills him from the inside in what looks like a truly terrible way to die.

This all happens about 15 minutes into the movie, give or take.

Killing off big names or would-be main characters is hardly new — Scream famously killed Drew Barrymore in the very first scene. Psycho killed its ostensible main character midway through the movie in the famous shower scene, and Game of Thrones beheaded Sean Bean’s Ned Stark in the first season. The exact circumstances of all these deaths differ, of course, but all of them let audiences know that anyone can die. By killing its most bankable actor first, Life tells everyone watching that it’s not fucking around.