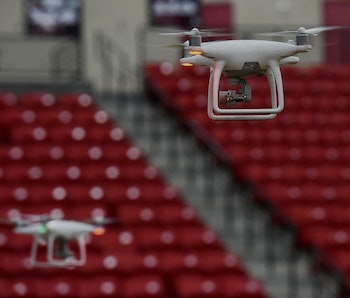 Drones are not flying cars. Most people don’t need this fact pointed out to them, but government regulatory bodies have such a strong bias toward forcing new tech into existing legal boxes that they can often look right past this seemingly obvious truth. A recent call for proposals for new systems of drone regulation shows that the industry is well aware of the problem, but no one idea seems adequate to address those problems, thus far. Here are some potential solutions to the looming problem of keeping track of drones.

Drones are too small, quick, and high-flying for physical visual identifiers to work, but one white paper submitted by the world’s largest commercial drone manufacturer, DJI, has a different proposal. It proposes requiring drones to broadcast a radio identifier that would allow law enforcement to associate any drone with its owner. We may all end up with drone-scanning RF tuners in our smartphones, since that’s basically what would be needed to let people record these IDs and show them to the cops. Even then, though, drones that fail to broadcast the ID won’t stick out like cars without a visible license plate, making enforcement far more difficult. This solution, while perhaps necessary, won’t really stop anyone, from corporate spies all the way down to peeping toms.

A “Stand Your Airspace” law

When can you attack a drone? This is a pressing question in the era of autonomous follow-drones: people need to know when they are allowed to throw rocks at a drone, jam its control signals, or even shoot it with a legally owned and operated firearm. If they don’t, drone-based harassment will become a real problem, as could harassment of drones based on bogus claims to have been bothered by them. There are also safety concerns to consider — I smack your drone out of the sky in a totally legal way, but then it falls on a third party’s head and knocks them out. Am I liable, or are you?

These sorts of controls will only remain effective for a while, but with current drone designs it would be possible to selectively deny drones access to the global network of GPS satellites if they failed to provide a valid, verifiable identification. Machine vision, however, which can allow drones to navigate without the need for access to a preexisting map of the area, would provide a neat path around such regulation.

This might seem a bit draconian, but it’s worth asking what precisely we gain from civilian operated drones in certain contexts. While we might allow that companies like Amazon provide value for drone access to a city’s downtown core, it’s much more difficult to imagine legitimate “hobbyist” uses over certain altitudes, within certain distances of populates areas and buildings. There’s still the problem of what to actually do when you see a trespassing drone, but at least with clearly defined drone zones it would be a lot easier to know when a drone had forfeited its right to fly.

These could be enforced through the drone’s own programming, either by forcing it to respect zoning of certain GPS locations as off-limits, or even in response to a visual signal like a no-drones flag that homeowners could display.

Accept it and move on

Remember when people were freaking out about cameras in phones? What’s important to note about the now-total lack of outrage over iPhone cameras is that the alarmism wasn’t wrong, but simply went away. It was absolutely true that cell phone photography would change the nature of privacy in public spaces, and that it would introduce a host of new avenues for people to harass and generally screw with one another. Thus, the alarmists were absolutely correct — and still lost. It’s not necessarily the case that proving the downsides of drones will also prove that they need extra regulation or bans — perhaps it’s enough simply to keep those downsides in mind, and adjust our behaviors accordingly.