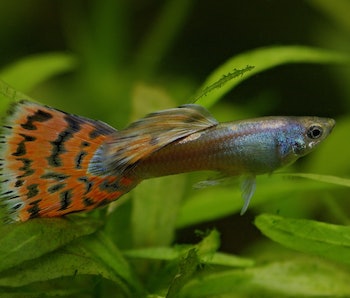 Scientists say sexual attraction is, at its deepest roots, based on survival. It serves an evolutionary purpose: We are most likely to feel sexually attracted to another member of our species who exhibits traits associated with fitness. If the point of sex is to reproduce, then we want to have sex with someone who seems like they will be able to produce healthy offspring and care for them in whatever way our species does that.

As we can observe in the animal kingdom, though — especially in humans — sexual attraction isn’t always about reproduction. After all, lots of people are attracted to people with whom they can’t reproduce, or with whom they choose not to reproduce. Attraction is often about shared interests and values, unconscious desires, or simple hotness, among near-infinite reasons. Pinning down what makes someone attractive, or whether you have a romantic type, is still a subject of study and debate.

Even when sexual attraction is about reproduction, it can be wildly variable. In a new study of Trinidadian guppies (Poecilia reticulata), scientists found that attraction did not follow a clear formula of fitness + opposite sex = attraction.

The study, published Wednesday in the journal Science, reports that female fish with bigger brains were attracted to more attractive males. It’s safe to say that P reticulata females, who have a well-documented history of preferring prettier males, are mating to make babies and not to start a bed-and-breakfast together.

Past experiments have shown that brain size in the female fish is correlated with higher cognitive abilities. The authors of this study suggest that the smarter females may be better at assessing the quality of their potential mates, as illustrated by their tails.

To confirm that the results were associated with cognitive abilities and not differing color perception, the scientists examined the fishes’ gene expression and optical responses. They found that the fish had similar vision capabilities regardless of brain size, strengthening the point that these apparent differences in mate preference have to to with intelligence.

“Selecting a mate is a key decision with important fitness consequences and that likely requires considerable cognitive abilities. However, our results offer the first experimental support for this idea,” write the authors of the study. “We observed that females selected for relatively large brains and known to outperform small-brained females in cognitive tests seem to make far more accurate mate choice decisions.”

Abstract: Mate choice decisions are central in sexual selection theory aimed to understand how sexual traits evolve and their role in evolutionary diversification. We test the hypothesis that brain size and cognitive ability are important for accurate assessment of partner quality and that variation in brain size and cognitive ability underlies variation in mate choice. We compared sexual preference in guppy female lines selected for divergence in relative brain size, which we have previously shown to have substantial differences in cognitive ability. In a dichotomous choice test, large-brained and wild-type females showed strong preference for males with color traits that predict attractiveness in this species. In contrast, small-brained females showed no preference for males with these traits. In-depth analysis of optomotor response to color cues and gene expression of key opsins in the eye revealed that the observed differences were not due to differences in visual perception of color, indicating that differences in the ability to process indicators of attractiveness are responsible. We thus provide the first experimental support that individual variation in brain size affects mate choice decisions and conclude that differences in cognitive ability may be an important underlying mechanism behind variation in female mate choice.