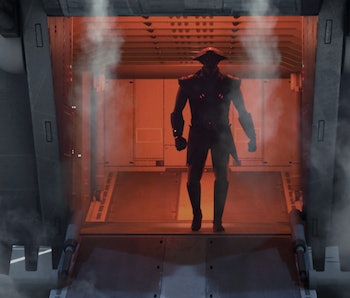 One of the most formidable adversaries in the first two seasons of Star Wars Rebels were the brutal lightsaber spinning Inquisitors. And now, it looks like the design for one of the Inquisitors, namely the Fifth Brother, took inspiration for a character concept from The Force Awakens. Was the First Brother originally one of the Knights of Ren?

On Monday, the offical Star Wars Twitter account released a quote from Kiri Hart, a member of the Lucasfilm Story Group. “Anything that doesn’t get used, we just put in the archive, because someday we may find a use for it somewhere else.” Much of the design aesthetic of Rebels has revived original concept art from Ralph McQuarrie. Most notably, the design of Zeb is based on an early painting of what would become Chewbacca. But the image released with the quote from Kiri Hart demonstrates that very recent concept art was repurposed for Rebels. In the second season, the Fifth Brother is a formidable, muscly assassin, who seemingly would have fit right in with the First Order.

This isn’t the first time concept art for a Dark Side Warrior for a Star Wars movie has resulted in a different character for the small screen. During pre-production work for Star Wars Episode I: The Phantom Menace, artist Doug Chiang created a female Sith Lord who obviously wasn’t used in the final film. But this concept art later became the canonical character Asajj Ventress, a former Jedi and former Sith apprentice to Count Dooku.

Ventress became a much bigger character than the Fifth Brother, but that doesn’t mean this artistic influence is over. The Knights of Ren may still show up in The Last Jedi, and when they do, they’ll need weapons. So, if one of Kylo Ren’s thugs starts spinning around a helicopter lightsaber blade in Episode VIII: The Last Jedi, you’ll know where he got it from.