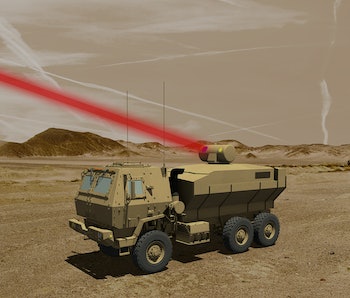 In 2015, Lockheed made headlines and validated the dreams of sci-fi nerds everywhere by revealing ATHENA, a 30-kilowatt laser which could destroy a truck or even a flying drone from over a mile away. But apparently, ATHENA wasn’t big enough. On Friday, the company announced that it will deliver an updated version of the massive energy weapon that can generate a beam twice as powerful as before.

There’s an obvious reason to want defensive laser guns, since light is quick enough that even the fastest incoming drone or missile might as well be standing still by comparison. Once installed, an electric-powered laser can be fired for a fraction of the cost of a high-end ballistic weapon. And as long as it has time to charge between shots, it can be fired indefinitely without the need to resupply ammunition. However, laser weapons have a history fraught with allegations of uselessness and government waste, and despite decades of work, weaponized photons have only recently begun to deliver results.

There are two basic reasons it took so long. The first was the sheer difficulty of creating a powerful enough, focused enough, and mobile enough laser platform to deliver meaningful energies over meaningful distances. This weapon operates by combining several smaller lasers generated in specialized lengths of fiber-optic cable, allowing it to generate incredible energies while remaining small enough to mount on a regular Humvee. Just a few years ago, similar guns were less effective and limited to enormous naval ships.

The other challenge in making military lasers was how to operate them as actual weapons. Robotic precision is needed to keep the beam in place on a single spot on a moving target, but that was just the beginning of the problems. It turns out that if you just shine a really powerful laser at, say, the wing of a passing drone, the point of contact for the laser is actually so hot that it vaporizes some of the metal, creating a small puff of drone wing that can then scatter the laser’s light. The solution has been to make the lasers rapidly pulse, allowing a tiny fraction of a second for that cloud of metal to dissipate and clear a spot for the next pulse.

It’s no secret why the military is starting to put some real urgency behind the initiative: drone proliferation. With small and even mid-sized aerial robots now finding their way into the hands of small states and non-state actors, it’s important to have a weapons that could quickly take down a sturdy flier, or even sweep deadly heat across a group of flimsy quadcopters, like Raytheon’s microwave emitting drone-killer. A single Humvee sporting an efficient, computer-guided laser weapon might provide drone defense for an entire convoy — according to one 2015 report from The Center for New American Democracy, so-called directed energy weapons could provide an “important, if dynamic, quantitative military edge.”

As to other uses for this technology, their relatively short range means that laser missile defense is an unlikely candidate for a wide-ranging continental defense system, but it could still be useful for protecting small, high-security areas like downtown Washington, DC. They also have meaningful drawbacks, such as vulnerability to weather and the possibility of easy countermeasures like missiles that spin far more rapidly, or drones with reflective coatings.

Lasers might therefor be most lastingly useful against terrorists and other organizations that habitually lag behind large states in terms of technical sophistication; Al Qaeda is just now beginning to release drones into the skies to support their crusades, and the U.S. military wants to make sure it has weapons like these just ready and waiting to bring them down.