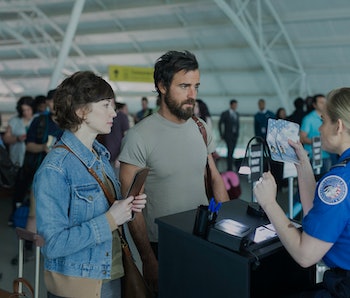 The final season of The Leftovers has truly done the impossible. Nope, it hasn’t ended the world or explained whether magical hugs are real. But it has made ABBA seem cool.

The upbeat and bouncy tune of “SOS” takes center stage in the final trailer for Season 3, which will consist of eight episodes. It continues last season’s pivot away from the show’s initial, maudlin first season. This last go-around looks, and sounds, like it’s going to be nuts.

The show centers around a world in which 2 percent of the population mysteriously and abruptly disappeared. Nobody knows where they went, and it will never be explained, because the point of this story is a study of how those left behind react. The answer? Not well.

In Season 1, Justin Theroux’s Kevin Garvey walked around shooting dogs, his current girlfriend Nora (Carrie Coon) paid prostitutes to shoot her while wearing a bulletproof vest, and his ex-wife Laurie (Amy Brenneman) joined a cult. The sophomore season saw the Garvey family relocate to the Texas town of Jarden, otherwise known as Miracle — because miraculously, nobody disappeared. There, Kevin had more hallucinations and died twice, Nora laughed in the face of demons, and his stepson Tommy peddled a cult of his own before joining another.

Season 3 looks like another apocalyptic event brews on the horizon as the central family prepares to relocate to Australia, a somewhat more literal end of the world. As this is The Leftovers, surely dire events and copious “what the fucks” await. The peppy, glitz ABBA tune is disquieting since it doesn’t match up with the ominous, violent tone of the commercial, which sets up Kevin as a possible (if begrudging) savior. He even says, “I’m not Jesus,” though that beard does look pretty good on him.

The Leftovers is utterly unique in its deft straddling of the mundane and the magical, never tipping the scale too far in either direction. This season’s tagline is “let the mystery be,” and it might truly remain a mystery how it managed to make ABBA seem cool.

The third and final season of The Leftovers premieres on April 16th on HBO.

More like this
Entertainment
Jan. 22, 2023
The Last of Us Episode 2 trailer teases a big reveal
By Claire Fox
Culture
18 hours ago
Lost Jumped the Shark by Breaking Its Most Important Rule
By Jake Kleinman
Entertainment
Jan. 28, 2023
Last of Us Episode 3 release date, time, and trailer for HBO's zombie show
By Claire Fox
LEARN SOMETHING NEW EVERY DAY.
Related Tags
Share: