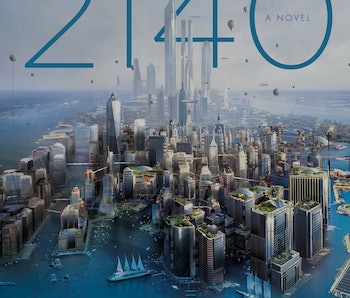 In 1992, Kim Stanley Robinson’s meticulous science fiction novel Red Mars helped to mainstream sci-fi books by putting emphasis on the science. Since then, Robinson has continued to come at the genre with a scientific approach. Still, despite all the scientific realism in his fiction, the author maintains that good stories are about people, not concepts.

In his latest book, New York 2140, he tackles a future world reeling from the serious effects of climate change. It could be an overwhelming premise, but he’s able to keep relatable human traits front and center. The author recently chatted with Inverse about how he approached writing New York 2140, why characters matter more than ideas, and the inspiration for his retro-future Mutt and Jeff characters.

The novel presents an impressive depiction of a future New York City, but characters are all totally relatable. How did you balance world building with keeping focus on your characters?

I focus on the characters and let the world-building take care of itself. Hopefully the story will reveal a lot of the parts of the world. So it helps to pick a cast of characters that do all kinds of different things. It also helps to have a narrator that is also a character, one way or another, that likes to explain things or talk about non-human actors in the story, like landscape and technologies and so on.

As you probably know, when people speak of expository lumps, or worse, “info dumps,” I feel they are bad readers who aren’t getting it, who are in effect being narcissistic, as if nothing could be interesting but dramatized scenes about people interacting. In fact, those scenes are often the most clichéd and boring parts of a novel, and many a novel is boring from start to finish because of that. The world is often more interesting than what people do to each other. That said, novels are about people, so that has to be kept in mind. What I do is give up on the idea of balance, also these various workshop categories like world-building or characters, which in effect pretend to know how fiction works, when they really don’t know how fiction works. Fiction is highly mysterious. So I let myself go crazy and see what happens.

Which character was the hardest to nail?

Vlade [the super of an NYC apt building], Inspector Gen [a cop], and Stefan and Roberto [two young boys] were probably the hardest. Amelia [a pop star who lives in an airship], too. Also Franklin [a financier]. One interesting question for me became: how much can you not tell? And, can not telling be more interesting than telling if you’ve told the right things? Because with such a big cast, doing what your workshop vocabulary would call “backstory” was not always a good idea, or possible. I ended up trying various modes of mysteriousness or suggestiveness. Reading a novel is a highly creative act, so it seems to me that the reader can be invited in to do a lot of the work of “characterization” on their own.

There are a lot of references to history and/or quotes that serve as pseudo-epigraphs. Beyond reinforcing the themes of the novel, how and why were these chosen?

I chose them because they seemed interesting to me, and I illustrated one aspect or other of New York’s great character as a city. I made giant lists of quotes and little stories and such and then winnowed down to the ones in the book. I probably had three times as many as I used, but there are already a lot, so I had to show some restraint to keep from overwhelming the other parts of the book if I did.

Mutt and Jeff are named for a very old comic strip. Why use such a retro culture reference right up front?

I liked the sound of it, and they’re pretty funny. For awhile, they were the names used to indicate any common pairing of friends.

Beyond the depiction of the future, what is this novel about?

It’s about finance, and climate change, and New York as a place, and those particular characters, and what we could do now to influence events to make a better future for the people yet to come. Utopian climate change fiction: the obvious next hot genre.

Like a lot of your other work, this novel feels very realistic. What was more important in this novel: realism or story? Did you ever have to sacrifice realism for style?

Story was more important to me. Realism is just a literary effect, deployed to try to give more force to the story, meaning more emotional impact I guess. And yes, I often sacrifice realism to get a good effect, but the trick is to try to create a flow state where the fiction is experienced like a dream, and while reading you tend to accept it all equally.

That’s not easy because we also read with a highly engaged critical sense that is evaluating the information in every sentence with a kind of internal “really? really? really?” and what you want is to keep getting a “yes really” acceptance as you read along until eventually, it happens so often that you begin to trust the novel and just go with the flow state it creates. So realism is good for doing that, maybe even to the point of being a kind of default for most novels. The novels that are somehow surreal, or anti-real, have a different kind of flow state, where you agree as a reader, “Okay this is like a dream, I’ll just accept wherever the story takes me and see how it feels.” Thus fantasy, etc., but I like realism. It’s a literary effect but a good one.

More like this
Culture
Jan. 26, 2023
Maze Runner: The Death Cure helped kill the YA dystopia. Can it help revive the genre too?
By Mónica Marie Zorrilla
Culture
Jan. 20, 2023
Why The Lost World is better than all the other Jurassic Park sequels combined
By Ryan Britt
Entertainment
3 hours ago
In Infinity Pool, Brandon Cronenberg Puts Alexander Skarsgärd Through Hell
By Isaac Feldberg
LEARN SOMETHING NEW EVERY DAY.
Related Tags
Share: