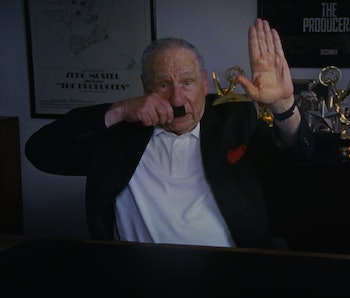 When Ferne Pearlstein set out to make a documentary focused on jokes about the Holocaust a few years ago, she didn’t expect to be tackling such a hot topic. And yet, with anti-semitic threats and crimes skyrocketing in the wake of Donald Trump’s surprise victory in the November election, The Last Laugh has become incredibly timely.

“When I was working on this, there was a French-African comedian who was getting in trouble for making anti-semitic jokes,” Pearlstein tells Inverse. “And at the time, that’s how distant these things felt — that it was happening in another country. And these few months later, it’s happening on our home turf.”

The documentary doesn’t explicitly discuss the recent spike in hate crimes, but the feeling of paranoia inherent in the Jewish community is a presence throughout. Pearlstein, who has also served as a cinematographer on hit docs like Freakonomics, speaks with both comedians and Holocaust survivors about how comedy has both helped Jews cope with the horrors of the war while also dredging up hard memories and causing outrage.

Opinions are all over the place: Sarah Silverman is unwilling to censor her jokes; while Mel Brooks, who spent years lampooning Hitler and the Nazis, draws the line at making cracks about the actual genocide. Some Jews, such as Anti-Defamation League President Abraham Foxman, who was a child survivor, rejects all jokes having to do with the Holocaust. Other survivors, such as activist Renee Firestone, can laugh about it, but only up to a point.

Inverse discussed the documentary and the public response in a conversation earlier this week with Pearlstein.

What kind of responses have you gotten from people since its premiere?

We have had a Q&A every single day since it opened. They’ve been incredible. A survivor stood up the other day and went on and on, recounting funny things that she remembered in the camp, but at the same time, she thought that there were jokes from Sarah Silverman or some younger people that she didn’t find funny. There is a generation gap, and it’s a matter of, is it something you just don’t find funny, but you’re not offended by it, or is it something you’re offended by? And it’s all so subjective.

With Renee, in the film, there are so many things to which she said, “That’s not funny,” but she’d also say, “I’m not offended, I just don’t think it’s funny.” I do think the joke that Lisa Lampanelli told did cross that line for her, and she was a little offended by that.

Which joke was that?

At the Roast of David Hasselhoff, she says, “Your music is so bad that if the Jews heard the music at Auschwitz, they would have started running for the gas chamber.” And that one crossed the line for her.

Do you think because Lampanelli isn’t Jewish, that made the difference?

Is it a matter of punching down instead of up?*

I do think punching down is an unfair approach. However, I genuinely don’t know if that’s what this is a matter of. Lisa might argue that the joke is making fun of Hasselhoff, punching down on him. I’m not saying it’s not a valid point, but I don’t know if I personally see it here. I think there are other issues with the joke.

Here’s an interesting thing. “There’s a joke that Joan Rivers told about Heidi Klum: ‘I haven’t seen a German look that hot since they were throwing Jews into the oven.’” What I’ve learned is just evoking the image of the camps or the gas chambers is enough to be considered crossing the line. Because there are some people who I’ve spoken to that have argued that that joke is actually making fun of the Nazis, which if we’re playing by those rules, that’s OK. But because it evokes the gas chambers, that’s where it crosses the line for people. Just the image, talking about that, is taboo for people.

How was the reaction to this movie after Trump was elected and those attacks began?

I think the first couple weeks, even the parts that were considered funny were hitting so close to home that they didn’t necessarily feel funny. You just felt bad about it. I think people are ready to laugh again, and they’re accepting it, but they’re seeing parallels.

So do you plan on touring around with the movie?

I’m here for the first 10 days of the New York run. I leave for Los Angeles in a week; it opens there on the 17th. It opens this weekend in Toronto, and it’s slowly picking up cities along the way.

How do you anticipate audiences outside of New York and L.A. will react to it? I have a feeling it might be somewhat different?

We’ve played at festivals all over the world, and one of the only cities we haven’t been to yet is Los Angeles. At least for the film festival audience, we’ve had great responses everywhere — including Munich and Jerusalem.

How was the reaction in Germany?

It was really fascinating, because it was a very healthy sized audience, and nobody left before the Q&A; they all stayed. They didn’t ask questions; they just let the moderator ask me questions. They have different positions on free speech than we do, and really, it is ingrained in them that they cannot laugh at a Holocaust joke. So during those moments in the film, you could feel the tension in the room, from everybody holding back from laughing. There were other times, though, when they felt it was OK to laugh, which was fine — when they saw Renee or another survivor making the joke. It gave them permission.

What made me uncomfortable, and I was one of the only Jewish people in the theater both nights, was how un-self-consciously they were laughing at the jokes about Jewish stereotypes. They knew not to laugh at the Holocaust jokes. But they didn’t feel uncomfortable at all laughing at the Jack Benny joke about being cheap or the joke that Sarah Silverman tells, “What did Jews hate most about the Holocaust? The cost.” I was stunned by that.

I felt very brave at the Q&A and talked about it and told them it made me feel uncomfortable. I tried to draw out conversation around it and did it at the second Q&A as well.

Those are ingrained prejudices that are OK to laugh at; it’s unspoken.

The first night, I was the only Jewish person there. There was a Jewish woman who worked at the festival as a programmer, and I was telling her about the response and that people were afraid to ask a question. And she said, “Maybe they need to be prompted, so why don’t I go into the audience and ask the first question?” And the question she asked was, “What was it like to show it in New York versus the response here?” And it opened the door for me to talk about the night before, when people laughed at the stereotypes. And then people were comfortable enough to ask questions.

Somebody raised their hand and said, “I’m so glad you made this movie, but I’m so glad you’re not from here.” In other words, they were so relieved that a German person made the film, because that would not have been OK.

The Last Laugh is now out in theaters in limited release.