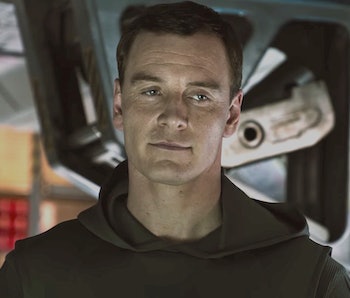 Phyllis used to feel guilty about taking a bath — but no longer. It used to be that the patient young nurse had to come over to sponge her down three times per week, a plastic smile covering his discomfort at this part of the job. He never complained, but he didn’t have to. The nurse was a nice enough young man, but at 95 year old, Phyllis much prefers her robot.

Recently published research shows that future robots might just look sort of human, right down to the musculoskeletal tissue. We might be a hundred years from realizing Michael Fassbender’s Walter android in Alien Covenant, but we’re getting there.

“Musculoskeletal humanoids have the ability to mimic more accurately the multiple degrees of freedom and the normal range of forces observed in human joints,” write researchers in Pierre-Alexis Mouthuy and Andrew Carr in their study in the latest issue of Science Robotics. They go on to say that “robots may assist in the growth of musculoskeletal tissue grafts for tissue transplant applications.”

Elder care is one of the trickiest areas in health care, since studies show that being successful is about more than just providing ample funding. It also has to account for the psychological realities of life for the aged. Robots have no sense of pride or indecency or judgment, and they never become lazy, or exploitative of the lower level of agency many elderly people suffer in modern society. Indeed, elder care robots could be poised to become a major growth area for consumer-facing robotics as people live longer and more will need assistance.

One of the greatest impediments to bringing that future about is the perception that robots are machines, impersonal and untrustworthy tools that unsettle the very people they’re meant to calm. There are a few ways right now to make robots more approachable, including the Japanese technique of shaping them like cartoon bears. Meanwhile, Western researchers have tried to build care robots that better mimic the shape and movement of the human nurses they’re meant to replace.

In the distant future, robots covered in musculoskeletal tissue could turn the frankly terrifying bone-and-muscle constructions that are currently the cutting edge, and make them palatable to non-surgeons.

But coupling real-life robots to skin growth could also provide big benefits for the skin itself — given real tasks in real environments, the robot should be forced to use every one of the joint’s degrees of freedom, perhaps bumping into things and stimulating the skin to grow a robustly as it would on a real body. It might not be too long before it’s common to see an elderly person with a skin problem on their arm, followed by a robot with a skin graft on its arm.