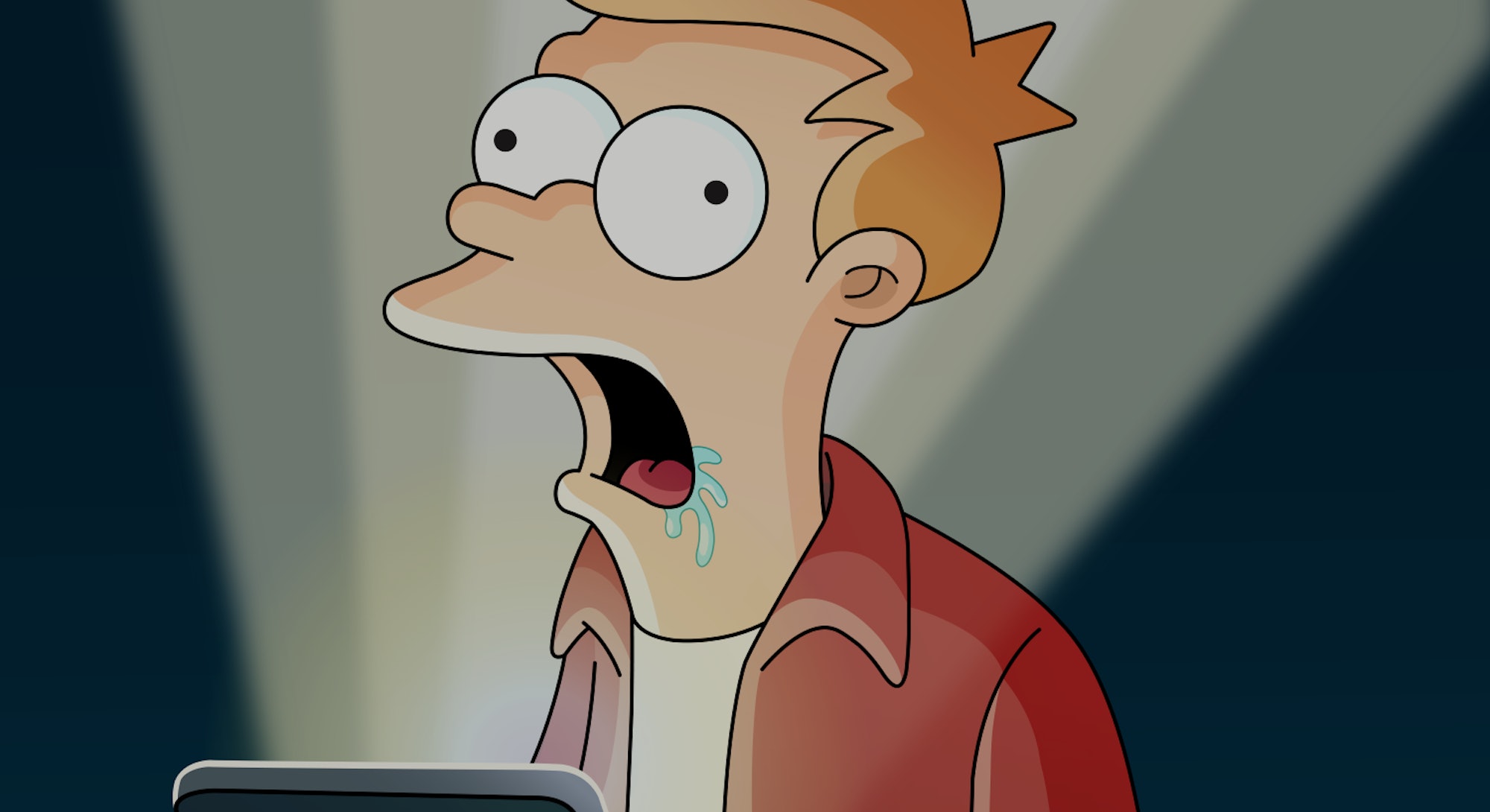 The popular animated series Futurama, which ostensibly follows the misadventures of a delivery company extremely far into the future, ended on Fox in 2003. Then it came back with four direct-to-video films between 2007 and 2009. Then it came back again with a final Comedy Central run that wrapped in 2013. And now, in a way, it’s back again with the video game Futurama: Worlds of Tomorrow.

There’s not much we know about the game as of yet, but it’s a mobile gaming title coming this year from developer TinyCo. For those unfamiliar, TinyCo is responsible for the likes of Marvel Avengers Academy and Family Guy: The Quest for Stuff. It’s a very particular kind of licensed niche they’ve carved out, but as someone that’s spent an inordinate amount of time playing Avengers Academy … The company knows its stuff, which is why the Futurama development is particularly exciting.

To get a better grasp on exactly what’s going on, Inverse spoke with Andrew Green, head of business operations at TinyCo, about what’s coming down the line, what makes this a Futurama game, and how they’re working to really bring the Planet Express crew together again.

What can you tell us about Futurama: Worlds of Tomorrow?

We’ve kind of gotten the band back together, and the fact that we’re working very closely with Matt Groening and David X. Cohen and that David kind of works with us almost on a daily basis on the game. We’ve also hired a bunch of the writing staff that works with our internal narrative design team to make all the content for the game, all the quest design. We’re also working with Rough Draft Studios, Peter Avanzino and Claudia Katz, who are the original producers and animation supervisors of the show for the look and feel of the game as well as some original animation that we’re creating, like full-length original animation as well.

We’ve looked at and worked very closely with Matt and David and Fox to figure out what would be the best game for Futurama fans. I’m a Futurama fanatic myself, as is most of the team, and we’ve all watched the show. We’ve seen every episode five times. We knew that we needed to create a lot of new gameplay around space adventure to make this feel authentic, because this doesn’t just exist on a single playspace or regular-level playspace; we wanted to give people a real feel of exploration and how the characters interact in their adventures and deliveries together as well as make a really great story. But also use a lot of the things that TinyCo is good at; like mobile, progression, events, but there’s definitely some new gameplay that we’re not revealing yet about that space adventure that is very new and exciting.

How does this connect to Futurama as a whole?

It feels like an ongoing kind of infinite series. We’ve taken where the canon is, where it’s left off on its last run with Comedy Central, and we are creating a new story that is more akin to one of the movies that they did between the Fox run and the Comedy Central run. There’s a big thing that happens in the universe, but it’s the universe as people know it and it exists after the Comedy Central run. There’s a big thing that happens, and then slowly but surely you’re fixing that and then getting into all-new stories with all the characters that you love. The thing that the guys — Matt and David — were exceptionally excited about is creating new stories, getting deeper into the backgrounds of some characters that we don’t know and maybe even creating new characters eventually and definitely new planets and places of exploration.

How does this compare to previous TinyCo projects?

When we worked on Family Guy, we had some incredible access to the talent that works with Seth McFarlane, but mostly on the writing side. We got access to some amazing writers for Family Guy that work on the show. There’s enough of them that are working with us on the design that we get to create really authentic, great content, but we didn’t really get to build something from the ground up with Seth.

On Marvel, it was more of a reimagining of a series in the Marvel universe. That IP is all about reimagining and putting it in different contexts and coming up with multi-universe storylines, so creating a young person’s universe for that was a really fun endeavor; but that was more from the ground up, almost a new IP creation in partnership with Marvel. It was almost like developing a new IP within the Marvel universe and giving a voice to that, which came a lot from TinyCo with a lot of deep partnership with Bill Roseman from Marvel, who’s an incredible creative over there.

With Futurama, I feel like we’re building this thing from the ground up to be the authentic thing that the fans want with all the heavy hitters, everybody involved and on board from a creative perspective. We just have never had that level of access before, but I also think the reason is because the amount of love that Matt and David and Claudia and Peter and the writers and Fox have for this property is on par with the fans. They just want to keep doing it, so they just invest more of their time. It’s a real labor of love for them. And it comes out in every conversation, and the amount of time they’re willing to give us. We’re just extremely lucky, and they feel extremely happy to be able to have a medium to continue the stories and world creation.

Can you speak to anything in the game mechanically? What can we expect it to look like?

It starts — hopefully for any developer, but always for TinyCo — with excitement for an IP and a world and character opportunity. And then we go with an idea to the IP holder — like Marvel or in this case Fox — and they always hook us into the creatives, because the creative owners like David or Matt Groening, they need to feel like this is going to be a good opportunity. But what’s really magical that happens sometimes, and I think happened in this case, is we meshed really well.

Once we have that pitch and everyone feels comfortable, it’s like, “Wow I think we could really make a great game together.” It’s like any kind of creative partnership; you need to feel a certain chemistry with the people you’re working with. I think they felt that with us, and they’ve seen that we’ve had success in the past.

And then we go back and we look at our initial ideas and say, “OK, let’s break these into really coherent game systems,” and then we look at the game systems and TinyCo is really good at progression systems that are more simplified versions of RPG progression and figuring out how do we maintain a casual experience.

We want this to be a very casual experience, because even if you take an even more traditional RPG like a Final Fantasy or Skyrim, anything like that, and try to introduce Futurama on top of it, it almost would dilute the brand because the mechanics are so specific. Which is why people build brands on console mostly around mechanics, and everyone knows Skyrim plays like this and they learn to love it that way.

Whereas with a brand like Futurama, people have a very specific expectation of what a Futurama experience should be, and for them, it’s, “I want the humor, I want the characters, I want the space adventure, I want the zaniness, I want the references.” If you put too many mechanics on top of that, it dilutes all the things. So we’re trying to figure out how to create systems that are fun and will work on mobile, and monetize and make users want to keep playing the game.

But then we’re always trying to refine it so that it never gets too complex. Furthermore, we are also looking at the brand and what people love about the brand. Obviously there’s space exploration games, but with building that specifically to a brand like Futurama you have to do it in a very specific way. So we built a node map system that you fly around in the galaxy but we had to tailor that to the Futurama brand. That’s the next step of us refining systems and making sure they’re authentic to the brand and that we think they’ll actually work for the platform.

Then we come back with a cohesive core concept and we take everyone through it — we take David X. Cohen through, we take Matt Groening through, we take Fox through it — and they all ask questions and say, “Wow, this is amazing!” Or if they have things they want to change, they introduce those as well and we refine it. And once we’re all really excited about it, that’s when we begin actually building code. And that was the process here.

How do in-app purchases affect designing games like Futurama?

It factors in as part of the system design. So for any creative game, you need to understand the vectors that are going to drive players to purchase. No matter what type of free-to-play game that is, whether it’s League of Legends or Futurama: Worlds of Tomorrow, when you’re doing the system design … For whatever type of purchase behavior it is, whether it’s some type of strategic element or otherwise, they need to feel like it’s really motivating for them, and then they will design a system accordingly while also making sure it doesn’t break the fun or the immersion or the brand tenets or authenticity or any of that stuff, because if you break those elements then no one’s going to monetize anyone. No one’s going to stay in the game anyway.

If the monetization scheme is antithetical to the Futurama brand, then it’s no good.

Exactly, it needs to feel like a natural extension just like the game mechanics themselves. If the mechanics get too heavy — if I made a Futurama first-person shooter, in my opinion as a Futurama fan it wouldn’t make sense to me because that’s not what Futurama is. It’s not about running around shooting things. So you could make that game but you’re really making it for the mechanics; you’re not tailoring it to the brand.

That’s why I think console games traditionally have a hard time with some brands that I see. Because console games are really hard to make, and they’re really big and expensive, so a lot of developers want to use engines that they have available already instead of building a lot of new game systems and technology, which are riskier. And then you’re not tailoring that experience to the brand as much.

Is there a baseline for where TinyCo starts in the design process?

The one thing that we do start with is narrative. We have narrative systems, and how we design quests, and how that fits into the progression systems we have. We start with that because we know that is the most important aspect. Being immersed in a world and having authentic interactions with the characters you love, and being involved in that in authentic ways through the narrative is the most important part. We see our games as a narrative delivery platform. So we always start there.