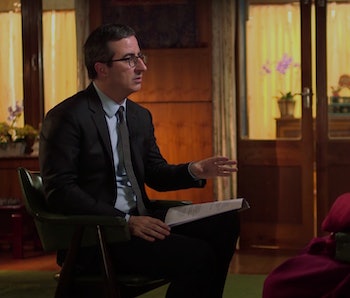 When John Oliver went to visit the Dalai Lama, he probably didn’t expect him to try and turn the Last Week Tonight host into a demon. Oliver interviewed the exiled Tibetan spiritual leader in an episode that aired Sunday night, in which they discussed curing Mongolians of alcoholism, the practice of self-immolation, and how the Chinese government is strongly against the Dalai Lama.

“They call me demon, so I want another demon, so you become demon!” he said, smiling.

The Chinese government’s stance stems from a desire to retain Tibet, which under some definitions makes up a fourth of the country’s total land area. Originally, the Dalai Lama sarcastically embraced the Communist Party’s characterization of him as an evil man, and in his interview with John Oliver, he appeared to take a lighthearted approach to the image, laughing as he claimed that Oliver was now a demon.

“This is not how I wanted this interview to go,” Oliver said.

Between 2009 and 2016, 146 Tibetans have set themselves alight in protest against the Chinese government’s suppression of the Tibetan people. Oliver asked the Dalai Lama why he does not condemn their actions and save the lives of these people.

“If I say their action is wrong, then their family will feel very sad that their family member did something against the Dalai Lama’s wish,” he explained.

“Our brain usually has the ability to use common sense,” the Dalai Lama told Oliver. “In Chinese hardliners, that part of the brain is missing!”

The spiritual leader also told an interesting story about how he went to Mongolia and found people heavily drinking vodka. He persuaded them to try horse milk instead, which he claims has persuaded the majority of Mongolians to no longer drink.

Oliver was not particularly taken by the idea of drinking horse milk, so the Dalai Lama tried to persuade him otherwise. “What’s the differences [between] cow’s milk and horse milk?” he said.