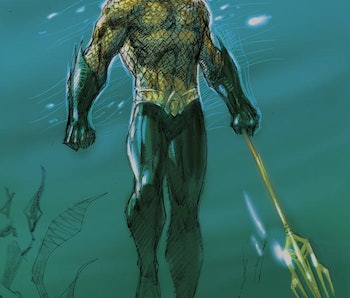 After the critical and box office flop that was 2016’s Batman v Superman: Dawn of Justice, many DC fans expressed concern online about the upcoming Justice League movie. Would it fall in the same manner and effectively drown DC’s attempt at its own cinematic universe to compete with Marvel’s MCU? Some speculated that adding more members of the League beyond Batman, Superman, and Wonder Woman would only further bog down Snyder’s Justice League. But a video tweeted out by the Justice League (and BvS) director, Zack Snyder, suggests that fans might be able to put their fears to bed at last. And it’s all thanks to the king of Atlantis.

The 5-second clip of Jason Momoa’s Aquaman gliding through an underwater throne room and coming to stand before a throne-sitting figure — who, by the way, looks suspiciously like Ocean Master, Aquaman’s villainous brother — looks just as appropriate as it does beautiful. The movement is, uh, fluid and the details look intense.

Aquaman fans got a first look at a submerged Arthur Curry in Batman v Superman when the King of Atlantis wasn’t appreciative of Batman’s stalking tactics. He used his trident to destroy Batman’s camera, but there was still just enough footage for Diana Prince’s Wonder Woman (Gal Gadot) to be a bit shocked by this underwater mystery man.

There are few underwater films with this free-flowing a movement — namely Disney’s The Little Mermaid and the lake scene in Harry Potter and the Goblet of Fire when Harry eats gillyweed and grows gills and webbed feet. So, nothing as intense and action-packed as the upcoming Justice League. Otherwise, underwater scenes are typically just a lot of helpless humans flopping around in the water in films such as Alien: Resurrection and Jaws.

That’s why humans should definitely leave water worlds to the Atlanteans.