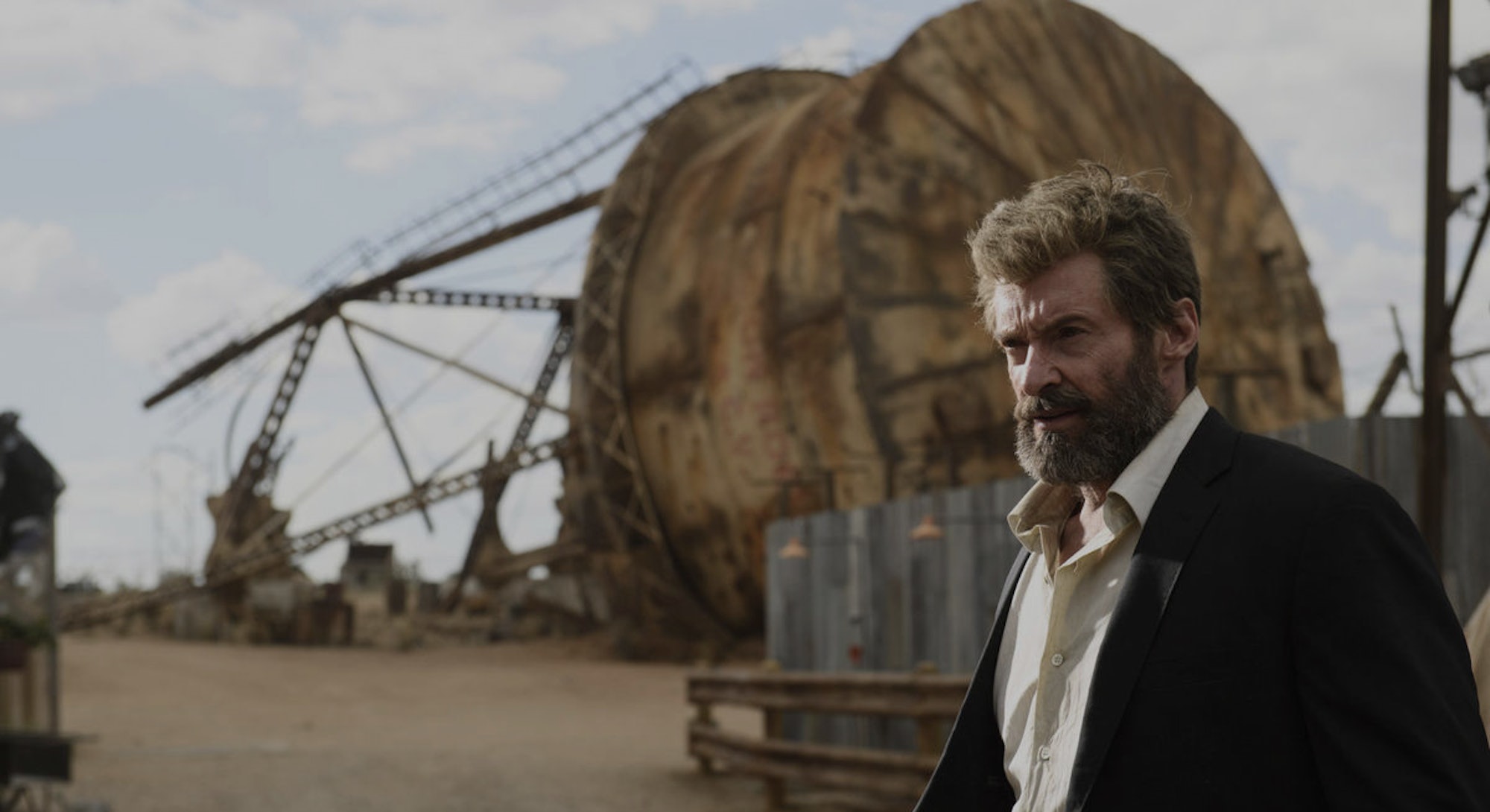 The ninth and final Wolverine movie has given a gift to superhero cinema: a little bit of variety.

And so director James Mangold and production designer François Audouy set out to make Logan different. Instead of a typical superhero movie, they decided to make several other kinds of movies, all rolled into one mutant package: Logan is a neo-Western, a road movie, a father-daughter adventure, and a tragedy.

“We were really forced to change our thinking and sort of break out of that sort of muscle memory,” Audouy told Inverse. “When you work on these superhero movies, there’s a reason that sometimes they kind of all feel the same. There’s just a certain way of doing it, and we wanted to really break the mold and we had a smaller crew, a more nimble, agile crew.”

Audouy spoke to Inverse in detail about the ways that he and Mangold changed the formula, what movies inspired Logan, and how they pulled off a legally impossible shot.

This isn’t a typical superhero movie — it’s more like a neo-Western. It’s a genre we don’t see much these days, so did you take influence from old movies? If so, which ones?

Jim had us look at a bunch of movies for inspiration. One that really stuck was The Gauntlet, a 1970s movie with Clint Eastwood. It’s a road movie; Eastwood’s a cop that has to take this young woman across like Arizona to Vegas and then back to Phoenix or something. We also looked at The Cowboys, which was a Western with John Wayne. Paper Moon was an influence in a way.

The Cowboys was the only one of the bunch that wasn’t really a road movie, but there were two things that we found inspiration in. One was that John Wayne dies at the end of the second act, and it’s like, “Holy shit, John Wayne just died. That’s never happened before.” And the kids have to sort of band together and become sort of the heroes in the end, so it’s very non-traditional in that sense. Jim is funny; he was referring to this as his “Little Miss Sunshine with Wolverine and claws.”

Visually, were there other movies that you looked to?

I just knew that I wanted to make a movie that was more rooted in style, like 1970s American cinema. There was something that happened in the ‘70s where the movie got out of the studio and went on location. One of the movies that did that really strikingly was Bonnie and Clyde. I wanted to make that kind of film. I wanted to make a movie that was like French Connection where you’re really out in different places and feeling and smelling the air and feeling the horizon and the surroundings and the DNA of the places.

The comic book it’s based on, Old Man Logan, is a post-apocalyptic tale, but the movie has a less devastated landscape. Why the change?

We knew it was going to be an Old Man Logan-type movie, but you look at that comic book, and it’s bonkers. It’s a super-stylized, bonkers, post-apocalyptic world with a different form of government, and it’s even more bonkers than Mad Max. It’s like an 11 on the scale of “out there.” Jim wanted this movie to be a movie about the characters, and he didn’t want the distractions of a very complicated story. All these new rules of how to take up screentime and be explained. At one point we had a touch-screen glass sort of iPad on steroids poker table in the back of Logan’s limousine, but it went away because it was too distracting. We had more sort of touch-screen technology and graphics and things.

We pared that back. Even the movies that are coming out, it seems like every movie has to have holograms even though holograms don’t exist. Every Marvel movie exists in a world with holograms, bizarrely, even though it’s present day; it’s like, where did this technology come from? It was really about very, very subtle cues and hints to tell the audience it wasn’t quite present day, without being distracting, so we could just really focus on the energy of the moment and the narrative.

It’s interesting; it’s probably the first superhero movie to not have all the standard sort of sci-fi tropes that you’re supposed to have. I think it’s almost like … I was really worried about not having it, because it’s almost like you’re supposed to have certain things when you’re set in the future. But the thing is, you’ve seen them all a million times and they’re all sort of cliches. Even these movies that are set lightly in the future, it’s all starting to look the same, you’ve got the glass see-through monitors and displays and touch screens. We just consciously decided not to do that.

I think it also does something interesting in that it keeps the audience curious as to what is outside of the frame. What is this world? What’s going on? We don’t explain much about the world other than that there’s a mysterious sort of energy drink that everyone’s drinking. That’s somehow tied into the pressures on the Midwestern economy and agriculture, there’s that thread. There are the border wall and little flavors and teases of the world beyond, but we don’t ever get distracted by them.

What was the hardest thing to design? Especially because you’re at a lot of real location work, which is probably different from a lot of these sort of big blockbusters.

The limo, making the vehicle itself. I had never done a vehicle before in a movie. It was really difficult because we built three limos. There were two that were pretty identical, inside and exterior. And then there was a third one that was like a Baja racer that was designed to go over 100 miles per hour across the desert and have insane suspension.

But what made that vehicle very complicated was that we were shooting out of context in our schedule, so one day we would have to shoot the limo pristine, like in the beginning of the movie, and then the next day we would have to do the limo that’s been shot by automatic weapons fire and had gone through this huge chase and is barely running. So everything had to be designed to come apart. We used a Chrysler 300 and then took it completely apart and then created a new car over a Chrysler 300, so that was a huge, huge challenge for me.

The other thing that was just an overall challenge was just figuring out the journey. Jim kept having these ideas of places he wanted to stop. So the journey had to feel plausible and logical. At one point we were going to stop in Las Vegas, which was kind of pushing everything further west. Then I was really struggling with how to do a cornfield in the Midwest after going all the way to Las Vegas, and then where that would take us at the end of the film.

The Vegas element ended up becoming Oklahoma City, which I think was much more unique and interesting, because we’ve seen Vegas a million times in movies, but this was this odd sort of stop along the way that’s incongruous and surprising in this kind of film. We shot in the Harrah’s Casino in New Orleans. And in Louisiana they have a rule where no minors are allowed anywhere inside casinos, so we’d have to do all of Laura’s shots elsewhere, like on a stage, to make it seem like she was there. They would not budge on a waiver. It’s like an act of Congress would be required and the governor would have to come and escort her personally for that to happen.

So that’s green screen, ironically, but a lot of the action was not.

Even the shot where Logan is pulled up the cliff to the fire tower, that’s all in-camera. That is an in-camera shot. So I built a crane at the edge of that cliff, and we put Hugh Jackman on a backboard and pulled him up the cliff. On that shot where the kids pull him over the cliff and pull him on to safety? That is in-camera. That is a real shot. That would be something that you just never do on any of the other Marvel movies.

Finally, tell me about the water tower “prison” built for Professor X. That’s obviously not a typical Marvel design.

It’s probably my favorite set in the movie. Jim had this idea before he even wrote the script, but he had this vision of Professor X living in a bourbon tank, like in Tennessee or something. When we decided to open the movie in El Paso, which I really liked because of the contrast to both sides of the border, and the danger and the texture that was there. When that happened, it for a split second, it became like an oil refinery. The original script had him living in an oil tank.

And then, as I was scouting for abandoned refineries and things all through New Mexico, I came across a smelting factory, and I didn’t even know what a smelting factory was, but it was outside of Deming in the middle of nowhere in southern New Mexico that was a really important find, just as an inspiration. I did a lot of research about smelting factors and I felt that that was more appropriate for a hideout. I didn’t want a big sprawling toxic refinery; it didn’t feel like home, like a place where you could hide out in this big toxic dump.

Then my researcher found interesting photos of fallen water towers. Jim knows a good idea when he sees one, he just said, “That’s it, that’s great, I love it.” We just went from there. We created this fallen water tower that I thought would become visually an interesting symbol and a callback to Professor X in his time when he controlled Cerebro at the X Mansion. When you first go into Cerebro, you’re greeted with a star field, and these little rusted out holes in the water tank were intentional to create a subtle callback to Cerebro. I thought it was kind of a poetic bridge from his heyday to sort of the jail that he finds himself in in his old age.