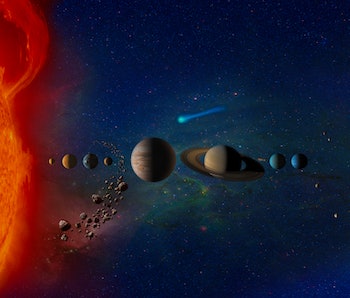 Scientists used to assume most planetary systems in the universe were shaped somewhat like bellbottoms, while our solar system was uniquely shaped like a flat disk. New research shows the solar system is not the special snowflake we thought, but the good news is it may be more likely there’s life out there on other worlds.

In a study being published in The Monthly Notices of the Royal Astronomical Society, researchers at the Australian National University created simulated planetary systems to model the stars detected by the Kepler Space Telescope, finding that many of these distant systems are shaped like the solar system.

“Many hours have been spent trying to show how special our planetary system is,” Charley Lineweaver, associate professor at the ANU RSAA and co-researcher, tells Inverse. “Our results pull things in the opposite direction, especially when combined with recent findings that the low eccentricities of our solar system are fairly common.”

The results help to raise hopes that the newly-discovered TRAPPIST-1 planetary system — which possesses seven different exoplanets, all of which seem to retain some potential of habitability.

Our solar system has multiple stars that orbit the sun on a flat plane. The seven TRAPPIST-1 planets also orbit the ultracool dwarf star on a flat plane. According to Lineweaver, the more distant the planet in the TRAPPIST-1 system, the closer inclination is to 90 degrees, which is what’s expected for a “flat” model.

If there are more planetary systems out there similar to the solar system, like our solar system, extraterrestrial life may have evolved in some of those systems (although we still can’t know for sure yet).

“The wealth of the Kepler planet data allows for the first time detailed studies of planet systems outside the solar system. We are now able to ask and answer questions like, how common are planet systems like our own?” Tim Bovaird, a researcher at ANU the lead author of the new study, said in a press release.

“Simulations with flared planet systems were slightly easier to perform and that is what researchers had assumed,” Bovaird said. “But this is an odd assumption because the inner part of our solar system is flat, not flared.”

What’s more, we might have a better chance of finding alien life. People are already hoping aliens exist on the TRAPPIST-1 planets, especially TRAPPIST-1e, since the planets are so Earth-like. With these new findings, other distant stars might be similar, too.

More like this
Science
17 hours ago
45 years later, scientists hone in on a mysterious alien signal's origin
By Charles Q. Choi
Science
5.11.2022 8:15 PM
An ultra-bright nova hid an elusive new phenomena — but astronomers caught it in action
By Kiona Smith
Science
5.4.2022 8:00 PM
Astronomers find a puzzling parasitic object — is it a black widow pulsar or something else entirely?
By Charles Q. Choi
Related Tags
Share: