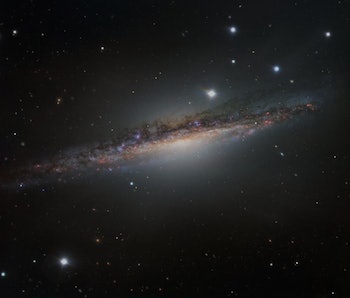 When observing galaxies far, far away from Earth, it’s all about perspective. Scientists may see spiral galaxies from a face-on point-of-view and gaze closely at magnificent spiraling arms and a deep, luminous core — but it’s only two-dimensional. An angled view might show the three-dimensional shape a little better, but to really understand what’s in a galaxy, it takes seeing it from the edge.

Unfortunately, we rarely have multiple views of galaxies. Even with all of our spacecrafts drifting through the universe, we still have such a small field to work with. It’s like trying to see the other side of a bagel in China while standing in New York. You’d have to walk for ages to get to the other side of it.

So, it’s always exciting to get new images to further understand the various shapes and sizes of neighboring galaxies and ultimately, to better understand our own Milky Way. In this newly released image from the European Southern Observatory’s Very Large Telescope, we can see spiral galaxy NGC 1055 — about 55 million light-years away in the constellation Cetus, or Sea Monster, and is believed to be 15 percent larger than the Milky Way — in all of its edgy glory.

With this kind of view, scientists can see where new stars form relative to old ones, measure the lengths of the entire disc and its core, and even catch weird anomalies. In NGC 1055, there is some strange “warping,” which is evident on the upper right side where the dark galactic dust seems to be getting peeled off the galaxy like a Band-Aid. Upon closer inspection, the whole thing seems to be twisting at odd angles. Scientists believe this is because of an interaction with a nearby galaxy, in which gravity is pulling on the structure.

Nevertheless, NGC 1055 seems to be moseying through the universe quite beautifully.