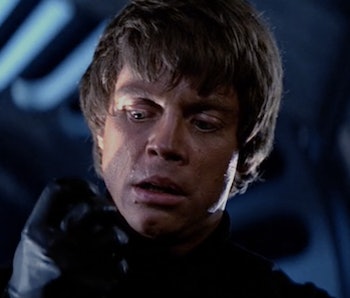 Losing students to the Dark side of the Force was enough to send Luke Skywalker into self-exile prior to the events of The Force Awakens, but the next Star Wars film presents an even more difficult task: convincing the audience of Luke’s depression. Because J.J. Abrams will be “upset” if Mark Hamill doesn’t win an Oscar for The Last Jedi, there’s a good bet that Luke could do a lot of crying in this next film — but will it be enough?

Even though there’s some doubt as to how serious J.J. Abrams was about that Oscar comment, the meaning is the same. The biggest challenge for Luke Skywalker and his alter-ego Mark Hamill won’t have anything to do with swinging a lightsaber or training Rey in the ways of the Force, but instead, conveying a huge sense of loss retroactively. While certain fans are speculating about a huge chunk of The Last Jedi taking place in flashback, there’s no way a flashback alone can account for the audience believing in Luke’s contemporary depression.

That burden is firmly on Mark Hamill’s shoulders to sell the angst. Whether or not Luke slapped Snoke in the face with a lightsaber and gave him that facial scar at some point in the past isn’t near as important as the audience buying Luke’s emotional state in the present. And just like in The Empire Strikes Back, a lot of Luke’s emotional progression seemingly occurs in pseudo-isolation.

The mind trick The Last Jedi has to use is to give Luke ways to express his emotions without just looking into the distance solemnly. With The Force Awakens, Harrison Ford and Carrie Fisher had scenes together which allowed us to believe they had a son, and that yes, he turned to the Dark side. Still, even those more exposition-focused scenes were the roughest moments of The Force Awakens. How and why did Leia know who Snoke was? Why the fuck would Han Solo turn his back on everything and just leave? Can we really believe the heroic Luke Skywalker went similarly AWOL? And if Rey does turn out to be Luke’s daughter, can we accept yet another deadbeat dad in the galaxy far, far away?

If Abrams is right, and Hamill’s performance as Luke is indeed Oscar-worthy, then there’s a good bet that a lot of that performance will rely on the ever-familiar Star Wars well of dysfunctional family drama.