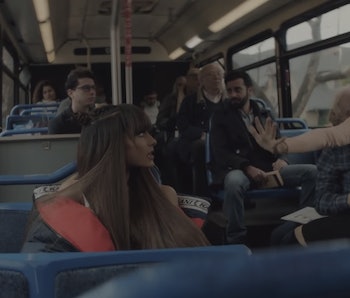 There’s no squeamishness about public displays of affection in Ariana Grande’s new video for “Everyday,” in which couples get freaky on car hoods, washing machines, and photocopiers with titillating urgency. And why should there be? PDAs make humans uncomfortable for sociological reasons, but evolutionary biologists would argue that it’s completely natural.

They didn’t always think that way. For a long time, PDAs among animals confused scientists: One particular species of bird, the expert divers known as grebes, confounded early biologists by continuing “mating displays” — the bird equivalent to kissing or holding hands — well after they’d secured a mate. In nature, courtship is all about convincing another individual to make babies. But the grebes that famed 20th-century biologist Julian Huxley observed had already had sex. What, then, were they trying to accomplish by making out in public?

Maria Servedio, an evolutionary biologist at the University of North Carolina, Chapel Hill, who authored a 2014 paper in Proceedings of the Royal Society B: Biological Sciences on the evolutionary function of PDAs, summed up the mystery behind public make-outs in an interview with LiveScience: “It’s very obvious why you’d want a display to attract a mate, but once you’ve already secured a mate, why should you bother to keep displaying?”

In her study, which she carried out with the help of scientists at the University of Chicago and Imperial College London, she used mathematical modeling and existing studies to determine whether there was a relationship between PDAs in animals and biological fitness. Flirting may be fun, but in biological terms it’s energetically costly; why would an individual waste effort on mating if you’ve already mated? She considered multiple bird species (many are monogamous), including Huxley’s monogamous grebe couples: Grebe canoodling involves diving into the water and swimming, in synchrony, upward toward the surface with a wisp of seaweed in their beak for the other — a sort of mating dance — or, in other cases, rhythmically shaking their heads at each other.

Her analysis showed that this kind of behavior did serve a purpose: It was linked to better parenting. Their hypothesis — “that these displays evolve because they stimulate the partner to increase investment in offspring” — was supported by their findings, which showed that the kids of PDA-enthusiast parents generally stood a better chance at survival. Thus, the study suggested that the evolutionary advantage to public makeouts is clear, at least for birds.

Of course, among modern humans, not everyone who makes out in public is trying to make offspring, let alone convince their partner to stick around and behave like a good parent. Casual sex aside, however, the study’s hypothesis holds up. While Servedio’s paper did not try to apply the study’s findings to humans, the idea at the heart of the research seems applicable to all species: If you want your partner to stick around, show them you want them. Whether you do so by offering them a piece of mouth-seaweed or riding them on a public bus, however, is totally up to you.

More like this
Science
8.8.2022 12:00 PM
Look! Extreme Tonga volcano eruption leaves a telltale finger-print in space
By Doris Elín Urrutia
Science
1 hour ago
Is my dog depressed or happy? Pet experts explain how you can tell.
By Tara Yarlagadda
Science
8.8.2022 11:00 AM
In Mexico, indigenous peoples and scientists race to save an iconic Aztec animal
By Lourdes Medrano and Undark
Share: