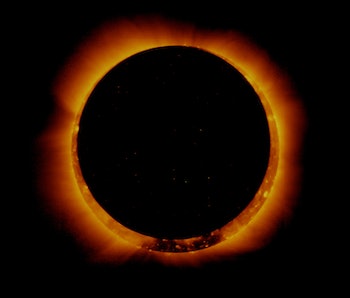 At 7 a.m. EST on Sunday, February 26, an annular solar eclipse will be visible in Earth’s southern hemisphere. Known as a “ring of fire,” an annular solar eclipse happens when the moon passes between Earth and the sun. It differs from a total solar eclipse in that the edges of the sun will still be visible, making for an eye-melting ring of fire. Even though it will only be visible to observers in the southern hemisphere, Slooh Community Observatory will stream the event live for the whole world to see. This might be even better for you if you live in the northern hemisphere, since you won’t risk totally messing up your eyes by trying to stare at the sun.

A solar eclipse occurs a couple times a year, when the moon passes between Earth and the sun in its orbit. Sunday’s eclipse will be of the annular variety because the moon is in the apogee of its orbit, the section where it is farther away from Earth and therefore appears smaller than the sun. A total solar eclipse, which occurs less frequently than an annular solar eclipse, happens when the moon is in its perigee, the section of its orbit that brings it closer to Earth. When this happens, the moon completely obscures the sun, but only when viewed from a particular place on the Earth’s surface.

Fortunately, this Sunday morning, it won’t matter where you are. You can overcome the limitations of time and space by tuning in to Slooh’s live webcast of the “Southern Ring of Fire” annular eclipse right here: