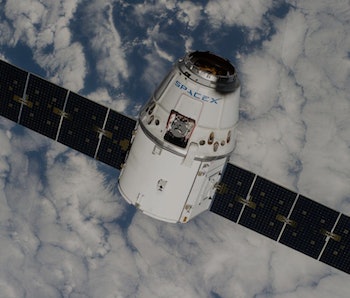 Twenty mice will get to float in space for another day.

Early Wednesday morning, SpaceX announced that its Dragon capsule, carrying precisely 5,489.5 pounds of cargo and scientific equipment, experienced a problem with its GPS system, preventing it from docking with the International Space Station. The official reason: “computers triggered the abort after recognizing an incorrect value in data about the location of the space station.”

This means that the CRS-10 mission, carrying approximately 250 science and research investigations to the ISS, to be carried out during expeditions 50 and 51, will continue for another day.

The original time for the Dragon to meet the ISS was at 3:25 a.m. on Wednesday. An hour later, NASA announced SpaceX “waved off” the rendezvous. Operating procedure for docking with the ISS calls for repeating an aborted attempt 24 hours later. The next meet-up attempt is set for Thursday. NASA TV coverage begins at 4 a.m. and the grapple is expected at 6 a.m. Installation coverage will begin at 8 a.m.

The Dragon capsule left Earth with a cloud of smoke atop a blazing Falcon 9 rocket on Sunday morning (watch the Falcon 9’s dramatic landing), starting the two-day journey to the ISS.

Among the research projects heading to the ISS are crystal growth, Earth science and technology research, and even tissue regeneration, which is where those mice come in.

The twenty male mice currently in space have had a rough go of it already. Part of the Tissue Regeneration-Bone Defect (Rodent Research-4) study, the mice have undergone “surgical resection to create artificial segmental femoral defects.” It’s all part of a project to find out if “reduced gravity induces cell proliferation and propagation,” which scientists know to be “a potent environment for tissue regeneration.” If we one day can grow limbs in space much faster than on Earth, you have these brave mice — who will be euthanized and sent back to Earth after their ordeal — to thank.

It will take about four weeks for the crew of the ISS to unpack the Dragon capsule. Then they will load it back up with stuff from the ISS and send it back to Earth for a five and a half hour trip back, where it will land in the Pacific Ocean off the coast of Baja, California.

But first, the Dragon capsule needs to get there.