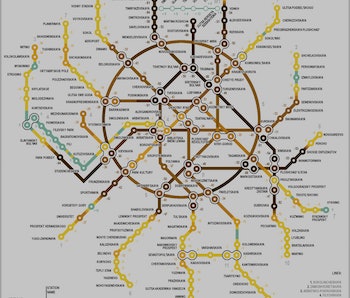 Moscow’s metro system is unfathomably deep under the ground. In fact, the system’s deepest station, Park Pobedy, is the third deepest station in the world, 84 meters (91.9 yards) under the surface. A map from Alexey Goncharov has revealed the staggering depths the famous network runs, lifting the lid on the mysterious train lines that run far below the city’s surface.

First, a little background. Moscow’s metro is breathtakingly gorgeous. The system was first opened with 13 stations on May 15, 1935. It was seen during the Soviet era as a triumph for socialism. Many of the early stations built during the Stalin era are in keeping with the socialist realism style, with grand sculptures dedicated to the workers.

The idea for a Moscow metro system had been around since the Russian Empire. To bring the project to life, the Soviet Union employed British engineers that worked on the London Underground. In fact, London’s (Gants Hill) tube station still echoes the Moscow system’s design today.

Moscow is built on a rather atypical geology, which presents some challenges for subway excavators. There’s a mix of gravel, limestone, sand, clay, and loam beneath the city. The clay layer is ideal for construction, but its depth varies around the city, which makes tunnel building difficult and at times erratic. Sometimes this clay layer runs very deep.

Within these deep underground tunnels, there’s some of the world’s most beautiful architecture:

Komsomolskaya station has chandeliers hanging from the ceiling:

Pyatnitskoye Shosse station, which opened in December 2012, has a more modern, but still beautiful marble theme on the platforms:

It’s an impressive feat of engineering, and it’s set to grow. The city plans to open 76 new metro stations by the year 2020, with the ultimate goal of having 93 percent of city dwellers within walking distance of a metro station. One new station, Solntsevo, is being designed by Nefa Architects and looks to bring a futuristic twist to the network:

Now, all Russia needs is to connect its deep, gorgeous system to a global network of hyperloop tubes. That may still be a long way off, but the future can’t come soon enough.