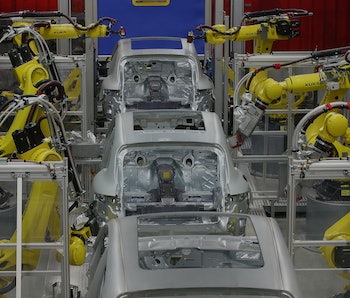 Bill Gates wants to tax the robots who will eventually take on jobs performed by humans today. This might seem a little strange since Gates made his fortune through technology, but in an interview with Quartz, the Microsoft co-founder dreamed up a few not-so-obvious benefits of taxing our mechanical work force.

“Right now, the human worker who does, say, $50,000 worth of work in a factory, that income is taxed and you get income tax, social security tax, all those things,” Gates says, explaining that a robot replacement isn’t just depriving a human of their job, — it’s depriving the government of vital tax dollars necessary to keep society functioning. “If a robot comes in to do the same thing, you’d think that we’d tax the robot at a similar level,” he continues.

In Gates’ eyes, a world with more robots means a world where humans can finally focus on the things that matter. He says that automation will free up humans to do other sorts of empathetic labor, like caring for the elderly or working in education, but he stresses that something like a robot tax would be needed to make up for the lost income tax.

“If you could take the labor that used to do the thing automation replaces, both financially and training-wise and fulfillment-wise, have that person go off and do these other things, you’re net ahead. But, you can’t just give up that income tax because that’s part of how you’ve been funding that level of human workers,” Gates says.

Gates also says taxation would serve as a sort of government regulation, and the state’s involvement might allow it to help mediate a company’s decision to go robotic and soften the blow of potential job loss. The tax might also dissuade companies from jumping into automation right away. Company owners might be more reluctant or think a little more before completely automating their factories, knowing that it isn’t a cost-free option. They’ll have to question things like how to fund the transition and how automation will impact the community.

The idea of a robot tax doesn’t scare Gates, who’s company is building new A.I. technology that may very well put people out of work at this very moment.

“I don’t think the robot companies are going to be outraged that there might be a tax,” he says. “It’s okay.”

Seems like he’s thought this one through. Now the question remains whether or not the U.S. government will consider such an idea.