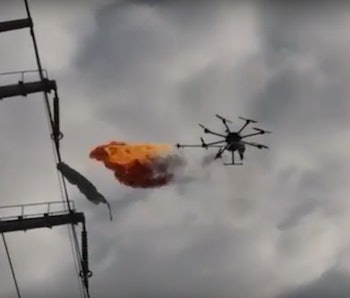 Attaching a flamethrower to a drone and sending it up to fry the bejeezus out of trash stuck on power lines is probably the most savage way to keep them free of debris.

Video of this flame-throwing drone appeared earlier this month, showing electrical power maintenance workers from the Xiangyang Branch of State Grid Corporation of China clearing trash off the high-voltage power lines in the city in Hubei province. It’s not clear exactly what sort of drone this is, but it looks a lot like the DJI S1000+.

The controller looks like a Futaba T14 SG, which is a 14-channel radio controller that can be adapted to be used on any drone.

Other fire-starting drones have been a bit more refined looking. The drone clearly has a tank of something hanging off its body that probably holds the fuel for the flamethrower, and the flamethrower itself has some sort of pilot light out in front of its nozzle tube. It’s definitely the correct size to be a 1000 series octocopter, but it’s hard to determine more than that.

There are about ten people in the video watching the drone frying something hanging off a power line. Only the two guys in green jackets and pants with controllers and hard hats seem to be necessary for the drone operation, and everyone else is in street clothes. Also only one of the guys, who look to be the technicians, seems to be actively flying the drone – the other has some sort of secondary controller that he doesn’t need the flamethrower to use.

Even with the photos, it’s unclear exactly why this is happening, or if the electrical power maintenance company in Xiangyang is really using flame-throwing drones to clear off power lines. But no matter why it’s happening, the footage is phenomenal.