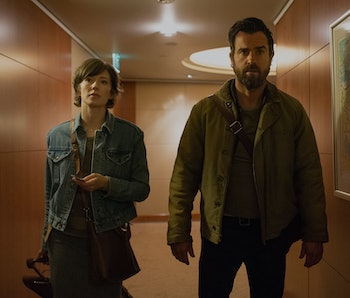 HBO’s criminally underrated sci-fi show The Leftovers has always been about people struggling with ordinary life following an impossible event. But, in a new teaser for the show’s third and final season, it looks like another impossible event is coming for everyone left behind: a Noah’s Ark-like flood.

The teaser mostly shows Kevin and Nora going through airport security to board a flight to Melbourne, but the more mundane footage is intercut with quick shots of fiery destruction and distress. There’s a placid female voiceover the whole time, and although it starts out as a pretty standard airplane safety talk, she soon turns to an impending flood. It’s incredibly creepy.

Presumably, Kevin and Nora are traveling in search of Kevin Senior, who resides in Australia. Recall that in Season 2, there were copious Australian references, including the Australian Doctor Goodheart, who was interested in the water in Jarden (as seen in “A Matter of Geography”) and the crazy prophet man in the tower who wanted to send a letter to Australia.

Even more intriguingly, there’s a brief flash of Tommy looking like he’s wearing a police uniform, which would be a dramatic departure from his recent cult-joining, rapist-entranced storylines. The Guilty Remnant isn’t shown explicitly but Evie Murphy is still around, suggesting their presence, and Matt Jamison looks to be in dire straights.

Justin Theroux told Inverse to expect big things for Season 3. “There’s so many bizarro twists and turns and special episodes. Crazy, crazy things happen. I think Damon [Lindelof], again, was writing from a very strong place, and it’ll be its own thing — it’s a big location change again — but it’s definitely still our show. I think it will be very satisfying.”

If you missed our interview with Damon Lindelof, catch it here.