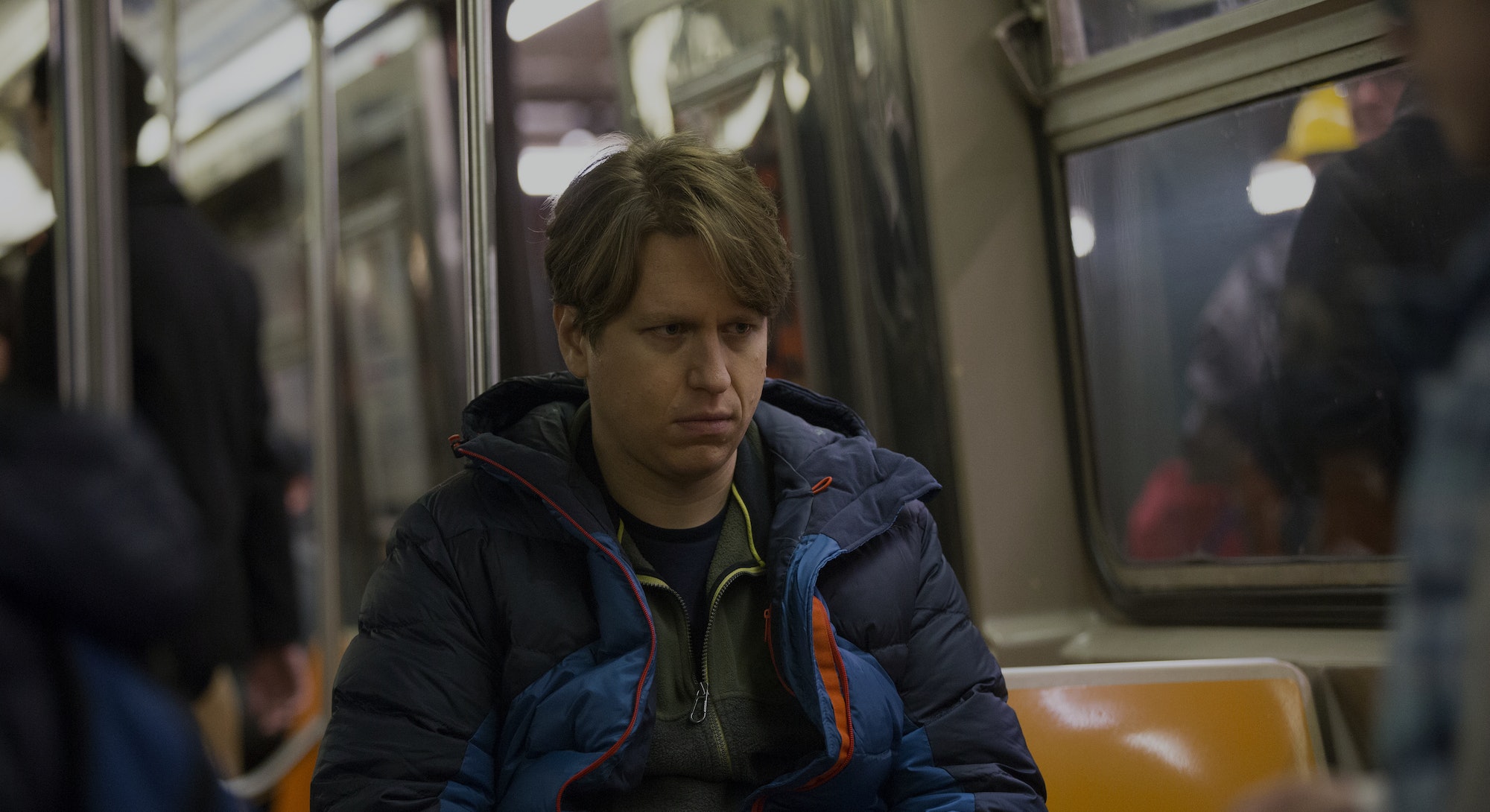 Pete Holmes’s new show on HBO is called Crashing, but it’s really the story of how he’s landed on his feet, over and over again.

The 38-year-old stand-up comedian may be best known for his run as the host of The Pete Holmes Show, a half-hour talk show that launched on TBS in the slot after Conan in October 2013. The program, though inventive and filled with appearances by up-and-coming comedians, struggled to pull in ratings, and was canceled the following June. It was a rough experience for Holmes, but he had been developing backup plans even before the official ax fell.

“The show got canceled, and I didn’t go on a bender,” Holmes recalled during an interview with Inverse this week. “I think I found out the show got canceled on a Thursday, and then the next Wednesday we were pitching a sketch show on Comedy Central. They didn’t want a sketch show, and then I had this quiet moment in my car where I was like, ‘Okay, this is an interesting time.’”

Luckily, he had also pitched another show, this one even before the talk show was officially canceled. During a quick meeting with Judd Apatow on the set of Bridesmaids, Holmes pitched him a new story: his own.

“Mike Birbiglia said to me, ‘What is [the story] when you’re dying you’ll look back and go, I did that today and I did that better than anyone else could’ve done it because it was so personal?’” Holmes remembered. “I was like, oh, a story about a religious guy whose wife leaves him and then he has to basically figure out how to be an adult in his 30s in the weird place of New York’s comedy scene.”

Once TBS pulled the plug, he and Apatow were able to move forward, and three years later, it’s finally about to debut. Crashing tells a story ripped from Holmes’s own life. He was raised devoutly Christian, got married shortly after graduating Gordon College, and four years later, at the ripe old age of 28, got divorced. It sent his life into a spiral, and all he had was stand-up comedy. That journey is the focus of the first season of Crashing, which was produced by comedy consigliere Judd Apatow and begins its run on Sunday, February 19 at 10:30 p.m. Eastern. Holmes, who also hosts the long-running podcast You Made It Weird, spoke to Inverse about his breakup, his terrible stand-up days, plans for future seasons, and more.

The show is based on your life and starts off with your divorce — which is prompted by your ex cheating on you and saying some pretty harsh things. Did you talk to your real-life ex about it?

Well, the character of my life is different. Lauren Lapkus, we brought her on, and we obviously wrote the character differently. So I don’t think if my ex-wife were to see it, I don’t think she’d say, “Hey, that’s me!” It’s more like the action of the relationship is represented in the show, but then, you know, a lot of the emotion and some of the points that she made in breaking up with me, I certainly reframed them and reworded them.

But the question of why someone would leave someone who is a sweet guy and a good person obviously informs the writing of the script. That was a hard lesson to learn and something I had to learn over and over, actually. That you can break up with somebody just because you want to, not because they’re a drunk or they hit you or they’re abusive or whatever it may be. You can leave just because you’re like, “I just feel like I want something else.” That was an interesting thing to try and imagine what my real wife was thinking and then also what the character played by Lauren is thinking.

She says in one of the early episodes, “You love comedy more than you love me.” Is that something your real-life wife said to you? And how did you process that?

I think writing the show was therapeutic for me, and some of those points that she made are points that I considered. You know, I think this was the problem or that might have been the problem. So they’re not necessarily full quotes from my real breakup, but I am interested in the idea that the show is really about two affairs and three breakups.

[My character] is having an affair with comedy while she is having an affair with another person. And then he breaks up with his wife and then his parents. And then he starts to break up, not with God, but with what his original understanding of God is. So it’s really just like, he’s getting kind of confronted on three very big levels. And one of them that he’s going to have to consider is his own hand in the breakup, and he needed to come to terms with the fact that he loved the comedy way more than he loved the girl that he had married.

And that takes perspective, because when you’re cheated on, you don’t really want to blame yourself.

Yeah, exactly. It’s been ten years since my actual wife left me, and it’s been time well spent in therapy and learning about myself as a stand-up and learning about myself through other relationships. I think it took that long to get enough perspective through my podcasts and through the talk show. Learning how to joke about it and learning how to bounce back, and like I said, learning how to cop up to your involvement. I wasn’t just some sort of victim. I was a guy who was very, very obsessed with comedy and with the jokes more than my domestic life. It took [every second of] those ten years to make the show, emotionally.

Maybe the most crushing part, though, is her saying that she would support Leif, her new boyfriend, if he loved comedy just as much as Pete did.

Lauren and I are friends. And I’m sitting with her and I’m telling her lines to say to me. So obviously we improvised as comedians. We tried to make the scenes funnier, but we also improvised as dramatic actors and writers, because, at first, I was just saying, “Now say, ‘If I was in love with you I would support you.’” or whatever. Lauren afterwards would be like, “Oh, God, I’m sorry.” As an actor, if I could have her saying things that really made me remember my divorce, it was easier for me to be in the moment and act dramatically and be emotional, which is something I had never done before.

The other major element of the show is Pete’s journey through comedy. He starts out enthusiastic, but bombs pretty bad on stage. Were those old jokes you used to tell when you started out? Did you go through old notebooks?

Yeah, I went back and found jokes in old notebooks and stuff like you said from my first years of comedy, a lot of that old-time stuff. I had a lot of jokes about Chinese food and expressions. Stuff that I still understand why I thought it was funny, but it is very … it’s weak. It’s weak stuff. It doesn’t have a lot of perspective.

In one episode, Pete’s parents come and see him perform, and though they don’t know anything about comedy, his mom says he’s not being honest enough on stage.

She is dead on. And that is one of her lessons, that no matter what art you’re pursuing, the name of the game is to try and make out as much authentic you as possible. And Pete, being religious, thinks that he’s supposed to be like a good boy even though he’s on stage. He has all these feelings. He’s going through a divorce. He’s feeling depressed. Yet, when he goes onstage, he’s still talking about [stupid stuff] and it’s like, he’s slowly figuring out that becoming an adult means dealing with the full spectrum of your humanity, including some of the uglier parts. So it’s really interesting to see him, and because I can narrow it on my own experience, to see him slowly step by step figuring out just how much to add and just how much more truth to infuse into his comedy.

You also talk about Pete “divorcing” his parents in the show. Were you worried about their reaction in real life?

Yeah. I still am. I am worried about that. Because I’ve been very open about the fact that my mother is essentially in love with me, and there’s been a sort of like a no-boundary relationship. It obviously was never actually inappropriate or anything but from my mother’s best intentions, but that sort of relationship with your mother, is one of the things that can stop you from being a grown man with your wife.

And because we want the show to be truthful and honest and share all the things that I learned, that includes some of the things that are harder to talk about. My mom, we do have a special relationship, and she does love me so well that I think even if she’s a little uncomfortable with the fact that we’re really putting it all out there, I’m confident that she’ll ultimately be happy and proud. And frankly, she’s like me. She’s a performer and she’ll just be happy that the character based on her is on TV.

Because this was so personal, what was the hardest thing to perform?

You know, it’s funny. The parents’ stuff was certainly up there and the breakup stuff was certainly up there. But I think the bombing in the club for 300 people, was really hard to do. My back would sweat. My mouth gets dry. My hands would get clammy. ‘Cause even though it’s pretend, it’s still rehearsed. I couldn’t tell my subconscious, “Don’t worry, this is just pretend.” It becomes very, very real.

I think everybody suffered, including the audience. Those background actors certainly earned their money that day. And then later, we did a show with another audiences where I was like, the joke is more that I evidently was being too dirty. When I was doing that, boy, I wanted to sincerely apologize.

**Do you imagine the show, should it be renewed, will continue to follow your life’s path or do you think it will diverge at some point? What do you have planned out in your head?

That’s a good question. I think at least on the first season I can say with some confidence that it will continue to have my real-life experiences as a thread, as a touchstone throughout. We’ve diverged from it and we’ve abandoned it at other times, but it’s always nice to go, okay, what was really going on? I think in Season 2, he’s gonna be dealing with the anger and the depression and also the getting funnier on stage and having that first relationship that’s not his wife.

Do you think in Season 4, we’ll see Pete host a talk show?

Yeah, I don’t know. I’m generally open to it, ‘cause it was such an interesting time. Obviously, I liked my show, the talk show. It’s interesting to kind of all these years later, do an homage to the show that I feel like still never got … It wasn’t widely appreciated. It’s rare to meet people that had seen it, you know. It’d be fun to tell the story of the show.