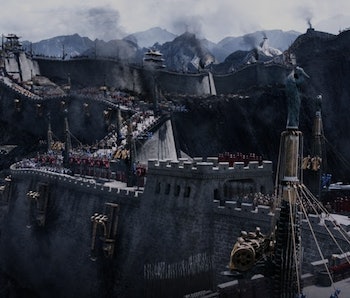 The premise of The Great Wall is simple. A bunch of European dudes, led by Matt Damon, head to China to find the one thing that will make them super rich: black powder. There are armies, huge AF monsters, and a massive wall protecting this stuff, so we know it must be valuable. But what is the mysterious soot, really? Turns out the highly coveted dust is the same simple chemical concoction that revolutionized the world.

Ninth-century Chinese chemists learned that mixing together three simple ingredients — saltpeter, coal, and sulfur — and carefully grinding it together would produce an explosive compound we now know as gunpowder. The process is dangerous and slow, and extracting the white crust of saltpeter (potassium nitrate) that formed on top of poop-filled soil or on the walls of some caves wasn’t easy. Still, it didn’t take long before it was turned into a weapon: Chinese armies had rockets, bombs, and land mines long before anyone else did, and the military strength it afforded them gave them unprecedented power. It’s no surprise that, in The Great Wall, Matt Damon and his pals are so eager to get it.

In reality, gunpowder didn’t make it West for centuries after it was discovered in China, and it very likely didn’t get there because of European mercenaries. Gunpowder first traveled via India to the Middle East between the years 1240 and 1280, and Europeans learned of it at roughly the same time while fighting the Mongols, according to Firearms: A Global History to 1700. But it takes guns to turn black powder into gunpowder, and the introduction of firearms is what ultimately made gunpowder so highly coveted. While guns were first invented in China, historians give Europeans credit for perfecting them.

By the 17th century, gunpowder had become a part of everyday life in Europe — not only during battle but in society gatherings, as well: By the Renaissance, Italians were launching fireworks into the sky and burning sparklers at parties. But ultimately, it was the military power that gunpowder provided that made it so valuable that the British crown seized full control of all of the saltpeter flats it could get its hands on. The Brits had learned the hard way what happens when an army runs out of gunpowder: In 1544, when Henry VIII invaded France and ran short, the army scrambled to import gunpowder from Antwerp before they could be caught short-handed.

While the plan hatched by Matt Damon and his gang in The Great Wall isn’t very sound, their financial ambitions aren’t unsubstantiated. Black powder — which is actually an American term coined for a smokeless formulation in the 19th century, well after Damon takes China — rapidly rose to the top of every nation’s list of necessities, and it stayed there until the 20th century.

More like this
Science
10 hours ago
Is a fact always true? A philosopher explains how to spot the difference
By Peter Vickers and The Conversation
Science
Sep. 23, 2022
Ancient DNA reveals the shocking scale of Anglo-Saxon migration
By Jennifer Walter
Science
Sep. 15, 2022
This tiny reptile roamed with the dinosaurs — and could solve an evolutionary mystery
By Jennifer Walter
Related Tags
Share: