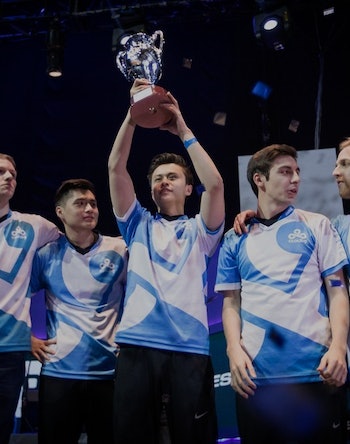 With big sponsorship deals and large cash prizes, esports have become a lucrative industry. Since 2015, the market for esports has grown by 43 percent to become a $463 million industry. As the popularity of esports grows in markets like North America, Asian teams from China and South Korea — where esports were popularized — continue to dominate the sport and consistently rank at the top. As a result, western teams have begun replicating a staple of the Korean professional gaming scene for the sake of winning: the team house.

A kind of communal team living quarters, the team house is a (typically) sponsor-purchased facility in which professional players live and train together. And there’s a lot of pressure on its inhabitants to perform; some of the esport gaming houses have been sponsored by billion dollar companies like Samsung. In December 2016, Inverse was invited to tour the team home of Cloud9, an esports team involved in a variety of competitive leagues and itself sponsored by the likes of Axe, to see how these new athletes lived and trained.

With so much glory — and profit — to be had, it makes sense to invest in a space where aspiring esport champions can live and breathe the game. However, living in a house where the sole goal is to train esports players has its own set of particular pros and cons.

The tour itself was relatively short as there wasn’t much that needed explaining. From the outside, the house was like many other suburban two-story homes in residential Southern California. If it weren’t for the invitation, there’d be no indication from the outside that the residence housed and trained some of the best players in esports.

The central living room was set up with Cloud9-branded gaming computer rigs, with similarly branded chairs and high-end monitors, gaming mouses, and keyboards all lined up in a semi-open square. This comprised the main area of the house. The living room, where the players review game footage, displayed a few sponsorship paraphernalia and gaming souvenirs, but not much else. And while Cloud9 explained their fairly regular schedule, which includes meals, the kitchen was pretty stark aside from a fridge for energy drinks and some protein powder on the shelves. It was clear that the house was put together with the singular focus of creating the best esports team in gaming.

The lives of those at Cloud9’s gaming house consist mostly of training with little mention of anything else. While Timothy “autimatic” Ta — who plays Counter-Strike: Global Offensive for Cloud9 — mentioned that he and the rest of his Cloud9 teammates try to get outside to keep them from fixating too hard on the competition, their day-to-day training regimen demonstrates the kind of intense focus they bring into the game. Like any skill at the competitive or professional level, practice is the key to success, especially in an cutthroat field like esports.

As a result, training consumes most of their lives. For example, Vincent “Biofrost” Wang and the rest of his League of Legends team members on Team Solo-Mid officially train anywhere from six to nine hours on any given day. They sharpen their skills on exercises known as “scrims” which are friendly matches played against other top-ranking teams. Without the pressures of tournament rankings or prize finishes, top-level teams are allowed to play against one another in the hopes of furthering their game and proficiency.

After team training winds down, Wang and his teammates often continue training on their own as well. “On top of that, you train in solo queue — which is the ranking system that Riot provides — so training can continue from anywhere from ten to 12 hours, and sometimes even more than that,” Wang admitted, echoing reports about gaming houses elsewhere with similarly long training schedules.

“For Counter-Strike [training], it’s pretty much the same,” Ta explains. “Our minimum practice is probably six hours, but that’s not enough for a lot of us because in order be at the top level you have to play more than that so you play for anywhere from eight to ten hours a day.”

“It takes a lot of dedication to play at a high level, and you definitely have to sacrifice a lot of things,” Wang adds. But ultimately it appears that working together a team in a shared space is a major improvement over playing with each other remotely, as is typical for an online game.

As with any high-level competitive field, stress sometimes runs a little high, especially with this kind of training schedule. With esports in particular, it’s important to not let the perception of competitive video games cloud the kind of stress that can build up among players. “I think it takes a lot of mental fortitude to practice all the time and perform at an optimal level,” says Wang, “and that’s probably the hardest part about gaming competitively. It’s something I think that the public doesn’t understand.”

That kind of drive to improve their own skills while contending with the pressures of competition is one that should be familiar to those involved in traditional sports. As esports becomes more expansive and popular, it’s important that we don’t forget about the physical and mental cost of any kind of competitive play at a professional level. With such young players pioneering what is essentially still new territory for North American sports, we collectively might need a reminder that their struggles as athletes should be properly considered out of fear of overburdening young talent with oversized expectations.