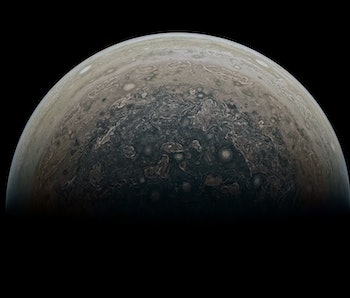 The alluring mysteries of Jupiter continue to come to light thanks to NASA’s Juno spacecraft, which continues to orbit the solar system’s biggest planet and delivering high-resolution images around the clock.

In this image, edited by citizen scientist Roman Tkachenko, the Jovian south pole is made visible with dazzling colors and patterns, showing off the gas giant’s banded layers of clouds. The clouds are made up of different elements like sulfur, phosphorus, and methane, which all mix with the hydrogen and helium composition of the planet causing different variations of pressure and turbulence. The atmospheric winds caused by this turbulence can surpass 200 mph.

Jupiter has only a slight three-degree axial tilt, so it spins almost right-side up, which means the poles rarely see the sun. However, convection on the planet shifts solar radiation to the poles to keep the temperature balanced across the entirety of the planet. This also means the planet has virtually no change in seasons. In contrast, Earth has a 23-degree tilt, so its north and south poles do get some exposure, giving us our four distinct seasons.

Juno captured this image on February 2 upon arriving at the south pole for the first time. The spacecraft was gliding about 63,400 miles above the clouds, offering up a perfect vantage point of the pole.

Juno has been orbiting Jupiter since July 5, 2016 when it first made its orbital insertion into the Jovian system. It was an astonishing feat: The spacecraft had to endure a 1.75 billion mile journey from Earth and then swerve its way into the orbit with little room for error, all while battling one of the most destructive radiation environments in the solar system. Since then, scientists have received beautiful images of the planet’s pearls and north pole.

NASA scientists are saying that the story of Jupiter is the “story of the solar system,” because it has long been theorized that Jupiter was the first planet to form around the sun. With the help of Juno, they hope to map the planet’s magnetic field, learn about its inner core composition, and measure the chemical makeup of the dense clouds, all in an effort to understand how gas giants form.

Citizen scientists are encouraged to submit their own artwork of Juno images to help facilitate the ongoing discussion and enthusiasm surrounding the most unprecedented mission in the history of space exploration.