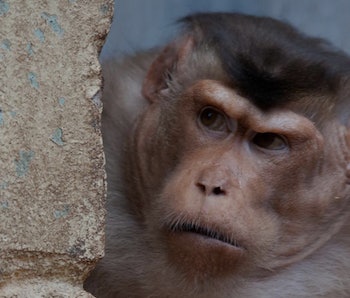 Just as in pissed-off human societies, agitated animal communities sometimes erupt into violent revolutions that establish new social regimes. In monkeys, these upheavals usually start as a series of small skirmishes — and occasionally the violence escalates into an all-out brawl. A new study reveals that this happens when animal fights reach a “tipping point,” after which scientists can accurately say, “That escalated quickly.”

A team of Arizona-based scientists came to this conclusion after analyzing conflicts that took place in a group of captive pigtail macaque monkeys. Publishing their work in the journal Nature Communications, they describe the two broad types of fights they observed: Some were small, involving only two or three monkeys out of the 48 total adults in the group, while others were huge, involving up to 30 adults. They wanted to build a framework for understanding how and when groups approached the “critical point” by determining “to what degree criticality can be controlled by the components of the system.”

It turns out the behavior and number of those components — the monkeys themselves — has a big effect on how soon the group will reach the tipping point. The researchers discovered that the group’s distance from this critical point depends on the “number of monkeys” that have started to fight.

And that number isn’t huge: According to a statement from study co-author Bryan Daniels, Ph.D., of the ASU-SFI Center for Biosocial Complex Systems, “agitating four or five individuals at a time can cause the system to destabilize and huge fights to break out.”

But starting a monkey revolution isn’t as simple as pissing off a handful of monkeys. In his statement, Daniels added that the architecture of a brawl depends largely on which monkeys are agitated. As with humans, some monkeys are peacemakers — or “policers,” as the researchers call them — and incapacitating these individuals by picking a fight with them can lead to the group reaching the tipping point more quickly. The flip side is that allowing policers to do their thing can move the group away from the tipping point.

In a broad sense, what the research reveals is that monkey societies are extremely delicate; one false move leading to a rash of arguments can lead to total social upheaval. While this may seem like a characteristic of a weak society, scientists sometimes view it as a sign of adaptability. A society that can change overnight is probably going to be better at switching from a defensive to an aggressive state than one that is more stable. But, of course, a less robust society is a more volatile one. It is, as the authors put it, a “tradeoff.”

Luckily for the macaques (and the scientists studying them), none of the brawls erupted into a situation as extreme as the fight scientists recently observed in a group of chimpanzees that beat, killed, and cannibalized their former tyrant. Despite what recent monkey research might indicate, our evolutionary kin are generally pretty civilized; while small fights are common, total upheavals are far less so, and all-out murder is incredibly (and encouragingly) rare.

More like this
Science
8.1.2022 10:30 AM
These 6-million-year-old teeth may be from Europe’s last panda species
By Elana Spivack
Science
7.31.2022 1:00 PM
How do cats co-exist with each other? The answer may lie in their gut
By Tara Yarlagadda
Science
7.28.2022 6:00 PM
Meet the tiny critter that pollenates seaweed like a bee
By Jennifer Walter
Related Tags
Share: