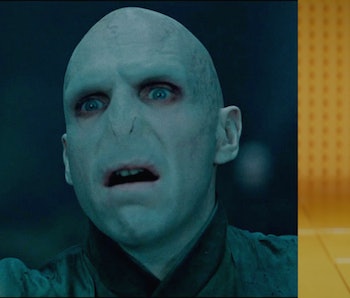 Godzilla once accidentally killed Sauron. DC Entertainment and Lego’s The Lego Batman Movie pits Batman against his arch-nemesis, the Joker, and a cast of the baddest bad guys to ever appear in science fiction and fantasy movies, including He Who Must Not Be Named, the creator of the One Ring, and “British robots” you should “ask your nerd friends” about.

The main plot twist of Lego Batman comes when the Joker is banished to the Phantom Zone by Batman using a portal gun. Upon entering the Phantom Zone, Joker is greeted by a cast of bad guys only an animated Lego film could ever possibly pull off: Voldemort of Harry Potter fame, Sauron (or, rather, the Eye of Sauron) from J.R.R. Tolkien’s The Lord of the Rings trilogy, a Dalek army from Doctor Who, Godzilla, King Kong, the Gremlins from Gremlins, and the dinosaurs from Jurassic Park — just to name the most prominent of them.

These bad guys are dubbed the baddest of the bad; the ones who are so dangerous that they had to be put in a completely different dimension to keep the natural (uh, Lego) world safe. Joker is excited to be a part of this group. After all, he spends the entirety of Lego Batman trying to convince the Dark Knight that they’re mortal enemies and that Batman really does hate him. The bad guys Joker finds himself surrounded by their respective worlds’ biggest bads.

Voldemort and Sauron are the group’s unofficial leaders, and the villains decide they’re more than happy to lend Joker a hand at finally destroying Gotham and taking out “a superhero.”

Joker and his bad guy army break back into the “real” world and take Gotham by storm, invading Wayne Manor after Sauron finds the Batcave with his eye that can “see through space and time.”

The fire-breathing version of Godzilla gives chase to Batman, Robin, Barbara Gordon, and Alfred Pennyworth, breathing a fireball at them only to have it hit Sauron instead, blowing his Lego tower to bits. Meanwhile, Voldemort spends his time flying around and levitating things with the Wingardium Leviosa levitation spell, the Gremlins try to chew up Batman’s planes, and the Daleks do … kind of nothing useful. But they’re there, and it’s amazing!

This wholly unexpected twist of bringing in not only a plethora of original Batman bad guys but also a cast of other classic and well-known villains only adds to the film’s minute-to-minute laughs and charming plot. Plus, watching Robin use a can of “shark repellant” on Jaws is always a good time.

The Lego Batman Movie is now in theaters.