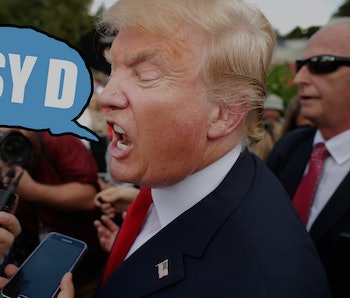 Another day in Donald Trump’s America, another tweet tearing the internet apart. On Wednesday, President Cheeto tweeted about traffic coming into the United States and people waiting for something called “EASY D.” Unfamiliar with the term, ~ The Internet ~ immediately broke into a communal investigation of what exactly Trump was talking about. In the search for answers, plenty of memes were created as hilarious guesses as to what Trump was referring to. Spoiler alert: A lot of the responses were dick jokes.

The president’s Twitter has become almost a meme in itself, with practically every update from Trump’s social media account becoming a dicusson point or source content for jokes. The “EASY D” tweet comes after an earlier slam of retailer Nordstrom for pulling daughter Ivanka’s fashion line. As corners of the internet began chatting about how Trump’s criticism of the company seemed to be a conflict of interest considering that the president shouldn’t be meddling in his daughter’s business affairs, people were shook just a few hours later when the EASY D arrived.

What exactly could Trump have been referring to with “EASY D?” Easy decision? Easy defense? Easy dookie? Was Donald himself the EASY D? It’s unclear! But the denizens of the internet sure had some ideas.

Perhaps Donald will be dropping a fire mixtape sometime this year. Wouldn’t be out of the question considering his background in entertainment.

Maybe it’s what Putin’s been serving to the administration.

EASY D could be what this girl was getting to the face.

Looks like sometimes he likes two of these Ds.

Students might be getting Easy D while Nancy DeVos is in charge of education.

The franchise is coming.

Keep Elizabeth Warren out of this!

The press conference with Sean Spicer explaining EASY D is expected to be wild.

Even Lady Liberty’s clued in.

Back in the day.

Gosh, trying to figure this all out is anything but easy.