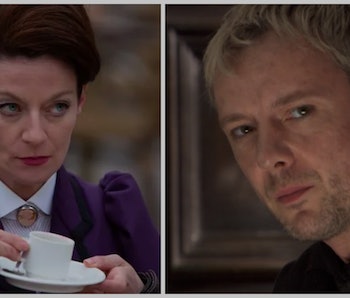 When the Time Lord known as the Master battled Rassilon in “The End of Time,” he was briefly on the same side as his longtime nemesis, the Doctor. Post-regeneration, the Master became “Missy,” and now there’s a new reason to believe that she will reunite with her old foe in Doctor Who Season 10.

A new quip from Missy herself indicates she’ll be riding alongside the Doctor at some point in Doctor Who Season 10. In a promotional video titled “Look Who’s Back!” Michelle Gomez confirms her return as Missy as she casually paints the side of the TARDIS. The video is obviously tongue-in-cheek, but still, Gomez is pretty much in character as Missy. After joking about the color of the paint — TARDIS blue, naturally — she says, “I’ll be coming out of this soon.” If Missy is coming out of the TARDIS then it follows that she’s riding in it. And if Missy is indeed riding in the TARDIS, are her and the Doctor friends again?

In “The Witch’s Familiar,” Missy double-crossed the Doctor and Clara and attempted to team up with the Daleks against them. But, just prior to that, Missy was helping Clara track down the Doctor, since both feared he might be dying for real because even though she is his mortal enemy, she’s also his oldest “friend.”

When the Master was still John Simm and the Doctor was David Tennant, a tenderness was revealed between the two, mostly because collectively Missy and the Doctor are the last two Time Lords in existence. But, since Gallifrey is officially “saved,” Missy’s return might also signal the return of the rest of the Time Lords. But the last two times the Time Lords have come into contact with the Doctor directly, they haven’t been happy with him, which might explain why a new alliance with Missy might be necessary.

In the classic Doctor Who series, the Master had a TARDIS of his own. That creates an outlying possibility for Missy saying that she’s coming out of the TARDIS. It’s not the Doctor’s TARDIS she’s in — it’s the Master’s.

More like this
Entertainment
Jan. 30, 2023
Doctor Who Could Become the New Marvel — But There's a Catch
By Ryan Britt
Culture
Jan. 18, 2023
The Mandalorian Season 3 will finally solve a huge Star Wars mystery
By Ryan Britt
Entertainment
Jan. 17, 2023
The Mandalorian Season 3 trailer breakdown
By Jake Kleinman
LEARN SOMETHING NEW EVERY DAY.
Related Tags
Share: