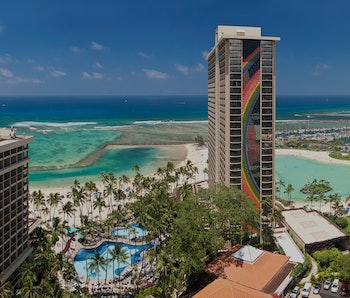 Hawaii is already pretty much a paradise. It has tropical weather, gorgeous beaches, lush rainforests, and by 2045, could add a self-sustaining renewable energy grid to its natural wonders.

In 2015, Hawaii Governor David Ige signed a bill that set a big goal: convert the entire state’s energy grid to renewable sources by 2045. The bill was pushed for by the Blue Planet Foundation, an advocacy group working toward renewable energy, which says Hawaii could be the best possible test case for going completely green.

“This transition is going to be easy,” says Richard Wallsgrove, project director for the Blue Planet Foundation, who is definitely setting up a punchline. Historically, nothing about going green has been easy.

The Blue Planet Foundation has been advocating switching to renewable energy in Hawaii for years, and the state’s high energy costs and cultural connection to the environment are powerful reasons why renewable goal is happening in there first.

And people involved in making the switch think these reasons complement the state’s ability to actually achieve its goal. Thirty years might seem like a short timeline to make such drastic changes, but Hawaii is setting itself as a prototype for the rest of the world, and a renewable grid and an all-electric car fleet is just the first step.

Islands like Hawaii don’t have access to fossil fuels like most of the world, and depend entirely on importing power — which means oil for Hawaii. This makes electricity expensive there, almost three times the national average. Climate change aside, reducing the cost of power is a big incentive for the state.

Part of the solution is that Hawaii has worked out is reliance on a lot of green energy startups — because even though start-up tech tends to be more expensive early in its life, Hawaii’s expensive electricity is also expensive.

“Their technology can compete in our market before they can compete in other markets,” explains Lauren Tonokawa, head of communications at the Energy Excelerator, a Hawaiian green tech incubator.

The Energy Excelerator, which grew out of a government-funded program to get Hawaii to its renewable goal, works to solve specific energy problems in the community. “The approach and the responsibility to continue moving toward clean energy falls on states and cities and communities,” says Tonokawa. “And it takes the people who know their places really well and know what types of problems and solutions are needed.”

Even solving the big infrastructure questions has relied on intimate knowledge of the state, Wallsgrove says. “It’s pretty easy to draw a box around the islands. We know what our energy inputs are and we know what our energy outputs are.” From there, people like Matthias Fripp, an electrical engineer at the University of Hawaii, can use that information to design models for Hawaiian Electric on how to transform the grid.

Fripp’s models project costs and usage for different types of renewable energy on different time scales. “The main point is that you do need some kind of automated tool to show you how combinations of resources are going to work together,” Fripp says. This tool lets Hawaii project exactly how it will use different energy sources in different conditions — and the different islands each get their own special blend.

Right now overall, Fripp is recommending using hydrogen for long-term power storage and a combination of wind and solar for daily use. Electric vehicles are a big part of the first stage of the transition, says Wallsgrove, who calls them “the low-hanging fruit.” Fripp then has to figure out how to decrease the cost of electricity as much as possible.

The solution, he thinks, is to change the time of day people use electricity, making sure the solar-generated power stored in the grid isn’t wasted during the day. The trick is to price electricity by the hour and give customers access to the ability to see the fluctuations through the day, hopefully encouraging people and companies to charge electric cars durin the day at work or pump water while electricity is cheapest. This would reduce the pull on the grid at night, and would be the cheapest way to use and store the massive amounts of energy produced during the day.

With Fripp’s model, just making constant incremental improvements and giving customers access to information that electricity cost changes will get Hawaii to 100% renewable with ease. “As we move into the future it’s more of the same — keep building more wind and solar, keep building more storage as needed, and let customers adapt,” says Fripp.

Based on what’s already happened in Hawaii, Wallsgrove thinks the entire world will be using renewable energy sooner than we might think. Back in 2008, Hawaiian officials predicted there could be 23 megawatts of rooftop solar online in 2015. Instead, Wallsgrove says the state was “15 times over that — that’s almost an order of magnitude.” And Wallsgrove thinks similar progress could happen if the state stays committed to a green energy future. “I think you end up with what looks like an exponential change,” he says. “This is something that is sort of inevitable.”

More like this
Science
3 hours ago
Even if geoengineering worked, over half the world could keep heating up
By Patrick W. Keys, Curtis Bell, Elizabeth A. Barnes, James W. Hurrell, Noah Diffenbaugh and The Conversation
Innovation
9 hours ago
EV ownership has a racial gap — one major change could bridge the divide
By Andrea Marpillero-Colomina and The Conversation
Science
Oct. 1, 2022
Scientists may have already discovered a “miracle” fix for climate change
By Saul Griffith and The Reader
Related Tags
Share: