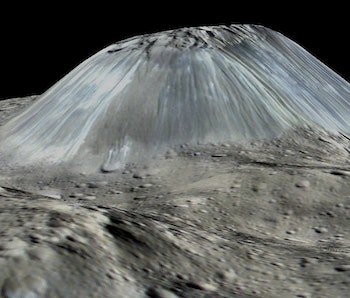 In 2015, scientists discovered a sole ice volcano on Ceres, a dwarf planet in the Asteroid Belt. Its solitary nature puzzled scientists, but a team of researchers now think it may not be alone after all.

Ahuna Mons, the 2.5-mile tall ice volcano (about half the height of Mount Everest), may have hidden older volcano siblings. Initially, Ahuna Mons’s solitary nature puzzled scientists, but in a study to be published in Geophysical Research Letters, researchers found that Ceres may have had ice volcanoes millions or billions of years ago. Over time, they flattened out.

“If you see one thing on a planet and nothing else that looks like nothing else, that’s sort of strange,” Michael Sori of the Lunar and Planetary Laboratory at the University of Arizona in Tucson and lead author of the paper tells Inverse.

Other dwarf planets and moons, like Pluto, Europa, Triton, Charon, and Titan may also have ice volcanoes. But these icy worlds are farther away from the Sun, allowing the dwarf planet to be cold enough to form ice volcanoes. Since Ceres is in the Asteroid Belt, it’s unusual.

“Ceres is just barely far enough from the sun for this to work,” Sori says. “But it’s also why it makes it interesting because it’s the warmest place where it’s affected. Most of the solid bodies in the Solar System are made of water, rock, and ice. Mars inward, it’s too warm for ice to be a major part of the volume.”

And last year, researchers found that Ceres’ craters are pockets of water-ice. It’s possible that if we live in outer space and other planets in the future, we may need to mine Ceres and other icy worlds for water.

What’s also strange is that Ceres has no atmosphere. On Earth, the wind, rain, and ice wear down volcanoes, but this wouldn’t be possible on Ceres. Researchers hypothesized that the volcano formed through viscous relaxation, or the idea that any solid will flow if given enough time.

Based on models they ran, researchers found that Ahuna Mons would need to be made of more than 40 percent ice to be affected by viscous relaxation. If this is true, Ahuna Mons will flatten at a rate of 30 to 160 feet per million years, and it’s at most 200 million years old.

“The reason why that’s a bit strange is I can’t think of why a body would be geologically inert for 4.3 billion years and suddenly turn on and be active for 200 million years,” Sori says.

Researchers will work to identify the flattened remnants of Ahuna Mons’ older siblings, which will help them better understand how Ceres formed and how Ahuna Mons ended up alone. Future missions will also study similar structures on other icy worlds.

“Instead of looking at volcanoes (on Ceres) that have this nice, steep very tall shape, we’ll look for flatter shapes,” Sori says.

More like this
Science
Sep. 23, 2022
NASA will smash a spacecraft into an asteroid Monday — what you need to know
By Georgina Torbet
Science
Sep. 13, 2022
10 years ago this month, a groundbreaking NASA technology changed spaceflight forever
By Allie Hutchison
Science
Sep. 12, 2022
A private mission wants to find alien life on the Solar System's most unrelenting planet
By Jeff Nagle
Related Tags
Share: