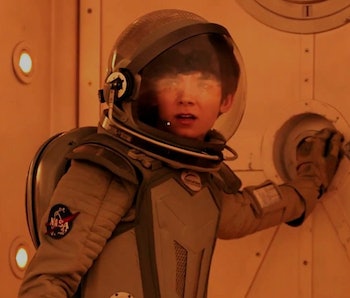 Cinematographer Barry Peterson faced a deceptively difficult challenge in shooting The Space Between Us: Somehow, he had to make something we see everyday look new again. The sci-fi drama tells the story of Gardner Elliot (Asa Butterfield), the first child born on Mars and follows his journey back to Earth. He’s on his way to find his father and meet a girl name Tulsa (Britt Robertson), which whom he has had a really long distance relationship with. Once they meet, Gardner and Tulsa tour the world, giving the first Martian a fresh look at things we earthlings take for granted.

Inverse spoke to Peterson about imagining earth from a stranger’s eyes, the work he put into the film, and more.

The movie is constantly changing. It’s sci-fi in the beginning, and then it’s sort of a coming age comedy and a road movie. Did you approach it in a visually segmented way like that?

The story immediately drives certain aspects of that aesthetic. But we had very specific visions for three distinct looks in terms of color palettes, and compositions, and film styles. The earth to space-travel portion is quite clinical, with wider frames and LED lighting for a cooler temperature to it. The second is when they land on Earth, and we wanted it to feel like an alien world, but with a colorful and beautiful technicolor perception. Mars was the final look, which fell somewhere in between the two worlds.

Did you enjoy that visual versatility?

Typically, you do one style the whole movie, and you walk away from it. You’re done. But the three styles were rewarding. Visual continuity in this would have killed the whole thing. The different approaches were all about the characters and the audience constantly ending up in a new place. Our main character just traveled however many months between Mars and Earth, so we need to see and feel that difference.

The visual style is so naturalistic and isn’t hyper-stylized like a lot of sci-fi films, even in the Mars section. Why go that route?

With a story like this, you’re trying to grasp a reality that’s tough to believe at this very moment, so anything we can do to make it immediately feel real helps. As soon as you start taking these environments and make them too sophisticated or polished, it ruins that reality. It was about grounding it as much as we can because the focus of the story was about people, not technology.

What was the toughest locale to get right?

We’ve seen outer space so much on-screen before. Even the JPL or NASA footage has become so common. So the space stuff is difficult because it’s familiar, but you also want to make it look credible because of that. You don’t want to cheat that look, and when you’re shooting it on set, it’s so technically difficult, with rigs hanging all over the place and people just out of frame lifting people.

Did the scientific details of the story effect the way you approached the movie visually?

We played with science as much as we could. You have to skirt a fine line between reality and fiction, and even practicality. If you’re shooting a scene that takes place on Mars, and you say the gravity is 62 percent, and you have everybody on flying harnesses in every shot, it’s impossible. There’s a practical side to it that you have to apply at some point or the movie would take you years to do.

The film is packed with gorgeous landscapes, on Earth and on Mars. Was that juxtaposition on purpose?

All the big visual Earth moments, like the kids ending up in the Grand Canyon — we’ve all experienced that in some capacity. We just wanted to scale it up and show that Earth is a beautiful place. We shot Mars on-location at a rock quarry in Albuquerque, with establishing shots in Hanksville, Utah, and even Monument Valley. But we wanted it to feel like when you’re on Mars, and you have a big gorgeous Mars-scape in front of you, you still have to look at it through a three-inch piece of glass. You’re removed; you’re in bubbles. It’s almost like watching something on television versus experiencing it. We definitely wanted to feel the panoramic vistas on Earth to be significant.

I’m fascinated with the idea of shooting scenes of things we see everyday as completely new. Did you discuss framing the scene when Gardner first gets to Earth as an experience someone will someday actually have?

Absolutely. We wanted bright, blinding light. We wanted that to line up with the science of someone’s pupils reacting to Earth’s sunlight for the first time, but it was thematically by design. The bay doors open up for the first time, and he can’t really see. We did that by blasting them with sunlight off huge mirrors. And we positioned the lander so we could put the ball of the sun right behind the main character to flare the lens and disorient the audience in this moment, too. It’s supposed to feel heavenly.