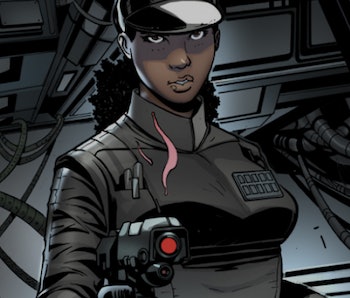 As reported on io9/Gizmodo, , Rae Sloane will be featured prominently in the final novel in the Aftermath trilogy — Empire’s End. In fact, Rae Sloane is such a big deal in this novel, that she’ll be featured on a new promotional poster for the book. Having risen through the ranks relatively quickly (she’s been promoted a bunch and became a Grand Admiral following the events of Life Debt), Rae Sloane is now officially the face of the Empire’s recruitment effort, trumpeting the message that there is “strength through order.” Rae Sloane first appeared in A New Dawn, a novel which serves a direct prequel to the show Star Wars Rebels. At that point, she was a captain, but in the time in between Return of the Jedi and The Force Awakens, she nearly became an Empress.

Barnes and Noble will release posters featuring two characters for Empire’s End: Grand Admiral Rae Sloane and Rebel pilot Norra Wexley. Norra Wexley is the mother of Snap Wexley, a pilot who flew with the Resistance thirty years later in The Force Awakens. This continues the Star Wars tradition of having lots of families involved with the Rebel Alliance, and later, the Resistance.

The expanded Star Wars canon beyond the films is at an all time high of precise connectivity. With Grand Admiral Rae Sloane being such a huge part of the next big book, a retroactive appearance in Rebels seems possible, while fans of the character hope for the ultimate canon reward: an appearance from Grand Admiral Sloane in The Last Jedi.

Star Wars Aftermath: Empire’s End will be published on February 21, 2017.