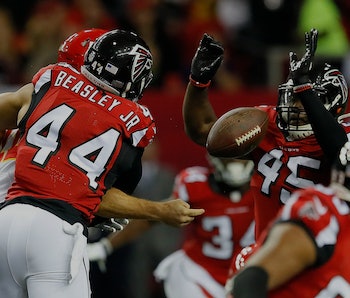 Any football fan knows that one of the most exciting plays on the field is the sack, which occurs when the quarterback (or whoever is acting as the passer) is tackled behind the line of scrimmage before he is able to pass the ball or run it forward.

Sacks are particularly amazing because — besides an interception or a fumble — there are few things better than watching a player on the defense blow through the offensive line and hit the quarterback down before he’s able to make a play. It’s a demonstration of the kind of speed and deft maneuvering one needs to get around the quarterback’s border of safety, followed by a powerful hit that effectively ends the current play.

Perhaps more compelling and nuanced than the strategy behind making a sack is the system of physical forces that go into making a sack manifest from paper to play. Here’s the witch’s brew of science behind America’s favorite tackle.

Newton’s second law refers to the fact that force is the equivalent of mass multiplied by acceleration. Mass is, obviously, the weight of the player, plus the extra pounds that protective gear like padding and the helmet add to the body.

Acceleration, however, isn’t just a measure of how fast the tackler is moving — it also has to take into account whether the quarterback is stationary or on the run (and if running, how fast and in what direction). Acceleration can have a pretty significant impact on the resulting force of the tackle. A tackler who is charging towards the quarterback also wants to conserve top speed for the final few steps, accelerating forward so as to maximize the amount of force that’s being applied. Just a tiny jolt can spell the difference between a sack and a miss.

According to Newton’s third law of motion, total momentum — mass multiplied by velocity — remains constant in a closed system. (You’ve probably heard this one recited as “Every action has an equal and opposite reaction.”)

When two players are on a collision course towards each another, a maximum force tackle is about to occur; if the mass is relatively equal, there’s a good chance the tackler — not the quarterback — is going to be the one on the ground. And if the quarterback is significantly bigger? Forget about it.

It’s also worth taking into the account how velocity will affect the potential for a sack. If the quarterback is, say, running away from the tackler, the impact is going to be reduced. This would decrease the chances of a major injury while making it less likely an effective sack will happen.

From the tackler’s perspective, an optimal set of circumstances regarding Newton’s second law requires the quarterback to be in a stationary position. As long as the tackler is approximately the same size as the quarterback, there’s a sack.

Torque refers to rotational force, which governs both sports (and non-sports, actually). And it can be a big part of how a tackle is made in football.

See, a sack won’t necessarily be a clean thing to behold. It might involve having to physically wrestle the quarterback down to the ground by way of swinging his body. A tackler will have more torque at a greater distance from the axis of rotation than closer to the axis.

In other words, if a tackler is trying to make a sack by swinging the quarterback down, he would do better to give himself some space so his arms can have an easier time making that swing. If he’s too close to the quarterback, he won’t be able to exert enough force to move the quarterback around. A perfect sack might actually mean giving yourself some arm space.

But tacklers don’t want quarterbacks to be heavier than them, nor do they want to possess too low of a center of mass. Tacklers might actually benefit from being shorter than the quarterback, or from tackling a quarterback before they might have a chance to crouch lower to the ground.

An optimal sack, then, might mean a short tackler versus a tall quarterback — and as long as the tackler possesses enough of the aforementioned forces listed, he’s almost guaranteed the upper hand.

More like this
Science
6.26.2022 10:00 AM
In the search for dark matter, an unexpected tool may give scientists hope
By Antonis Antoniou and The Conversation
Science
6.14.2022 4:15 PM
Rogue star gatecrashes cosmic baby-making party
By Doris Elín Urrutia
Science
6.28.2022 10:00 AM
How are drugs absorbed in the body? The science of medicine, explained
By Tom Anchordoquy and The Conversation
Related Tags
Share: