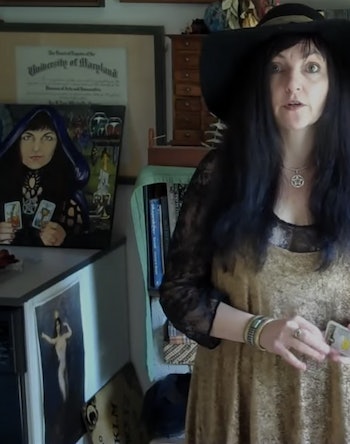 Reverend Joey Talley is a commercial witch; she provides private consultations and custom spellwork for a clientele she grows through referrals and the occasional public relations push. She even has a tagline: “No problem too big, too small, or too weird.” It’s catchy and welcoming, but it doesn’t underscore the micro-trend driving the growth of her business. It doesn’t make it clear that she is a tech witch, adept at banishing viruses from computers and casting various protection spells on mobile devices.

Talley, who has been practicing witchcraft professionally for 20 years and personally for 40, shows up to meetings with her clients toting a trunk stocked with whatever supplies she needs to get the job done. While she’s glad to help with daily magic — love and money stuff mostly — she is trying to make trying to make a name for herself in Marin County as a supernatural backup for Apple’s geniuses. She typically charges around $200 for a routine visit.

Eager to hear about the occult can overcomes code and circuitry, Inverse chatted with the Talley about her business, the god Hermes, and the constraints of her powers.

When was the first time you did a spell that was related to technology?

A client who called me in for his alarm system on his office building. No one could fix it and make it work right. They called me in and I did an energetic fix on it. Then he asked me to do something on his computer. That was how I started doing it for people’s computers.

I know nothing about computers or technology or anything like that. What I do is heal. Everything is energy, and just like some people can see more shades of red than other people and some people can’t tell red from brown or green — I have a greater sensitivity to energy. I can feel it. I always have been able to. I might move my hands near the computer, feeling around and getting to know the energy.

Does it feel like an animal or a person or do manufactured items give off a different type of field?

There’s different things going on with computers. As you know, some people are trying to be mean and they’re trying to put in bad programs or viruses or something like that, and that feels really different than when it’s the wires inside, or something’s pushed crooked inside. It feels different.

In a sense, you’re looking for human intent within the circuitry. How do you know when you see it?

When there’s something going on on the material plane inside it, like the wires are messed up, when I feel my hands through where the energy is flowing, I can feel where it snags. I can feel the energy snag or divert or go out of its line.

When you’re dealing with bad computer viruses because someone’s trying to be mean, I can heal their malevolent intent. Everything is energy. Everything, including your thoughts, your feelings, your attitude. So feeling where these energies flow is where my specialties come in. Sometimes the person with the negative, evil wishes needs to be blocked. Other times the computer will need me to help draw the virus out and that’s a lot like pulling a splinter out or getting infection out of a wound.

What supplies do you use to get a virus out?

Every situation’s unique. But, the things I find very helpful are a stone called fluoride, just like they put in the water. Fluoride is very helpful. Amethyst can be very useful, and Watermelon Tourmaline. Those are the ones I use the most, and I use on myself a pair of magnetic soles inside my shoes that are a part of my protection system to keep my energy system intact.

What do you do for protection spells, to keep viruses and problems from happening in the first place?

I like to use black stones; jet is my very favorite for protection. Jet … also Kyanite, but not all computers like Kyanite. Y.ou have to see if the computer vibrates well with it. We use the word resonate a lot, so you gotta feel how the vibration is with it. Jet, Kyanite, Obsidian, Apache Tears, Onyx, those are all good for putting protection in place. I might make a potion, we work closely with Mercury and Hermes, the god of communication and messages, obviously for computers.

I do all kinds of protection spells and anti-theft spells. You know how in computers they call it a firewall to protect the computer? I’ve heard that expression so there’s a protective potion I make called “fiery wall.”

Can we dwell on Hermes for a second? How does he get involved?

Do you have a lot of people calling you to do remote help?

I have people calling me from all over the world. What I like best is to be able to meet in person face-to-face, but that’s not always an option.

Do you talk shop with other witches?

Oh, yeah. I host a meeting at least every full moon. I have a ritual at my home and I belong to a couple of groups in the Bay Area. I know other witches and sometimes we’ll call each other up for advice or guidance. We swap recipes, so to speak.

Has there been a particularly nasty virus that was hard to vanquish and what did you do? Do people always go away happy?

I’m not God. I have not been 100% effective every single time. Most of the time I’m able to get really good results. There was this one guy — I don’t know what he did — and he was pretty unhappy with me and he didn’t want me to keep trying. He was pretty angry, but I did the best I could. I just couldn’t beat it. I couldn’t make his computer function. The virus was crazy. I don’t know what all those codes are, but it would pop pages of long lines of what looked like gibberish.

If anybody hires me and they’re not happy with the results, I just keep working on it until they’re happy. That’s usually the end of it because typically they call me last. They tried everything and they’re desperate. They’ll say that to me. They’ll call me up and say, “You know I don’t believe in the witchcraft, but I’ve tried everything else.”