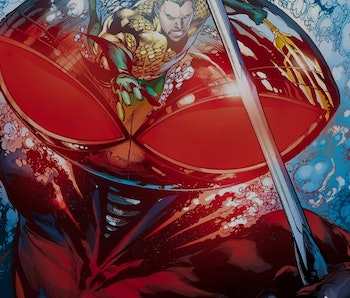 James Wan’s Aquaman is one step closer to completion. DC has just announced that the company has cast The Get Down’s Yahya Abdul-Mateen II as another major villain, Black Manta. On the heels of that news comes the rumbling that Nicole Kidman may join the cast Aquaman’s Atlantean mother, Atlanna.

So, who are these new characters?

Black Manta is a major Aquaman villain who has hunted the king of Atlantis throughout most of his comic book history. His origin story has changed many times; sometimes, he’s a shanghaied sailor who vows revenge against the ocean, and in other comics, he’s portrayed as a boy on the Autism spectrum who finds himself comforted by water. His one constant characteristic is his fervent hatred of Aquaman.

Abdul-Mateen II already debuted his intimidating onscreen presence as Cadillac in Netflix’s The Get Down, in which he chased after teenage girls and brutally killed several characters. Watching The Get Down, it’s not hard to see why DC was entranced with Abdul-Mateen ability to demand respect. Even when he’s dancing in a disco suit, he’s able to radiate menace out of his eyes.

On the other side of the coin is Nicole Kidman, who has generally been considered one of the most ethereal actresses in the world. Back when the Lord of the Rings films were being cast, rumors swirled regarding Nicole Kidman as Lothlorien’s queen, Galadriel, though that part eventually went to Cate Blanchett. Considering how Kidman has looked like a goddess across her filmography, it’s pretty easy to imagine her as an Atlantean queen who fell for a human lighthouse keeper, eventually giving birth to Aquaman.

Aquaman is slated for a 2018 release.

More like this
Gaming
11 hours ago
MultiVersus could be the first Smash clone to truly challenge the throne
By Eric Francisco
Entertainment
5.19.2022 12:48 AM
Doctor Strange 2 special poster reveals a terrifying deleted scene
By Jake Kleinman
Entertainment
5.5.2022 11:00 PM
The Marvel multiverse explained: Earth-616 vs. Earth-838 vs. Earth-199999
By Jake Kleinman
Related Tags
Share: