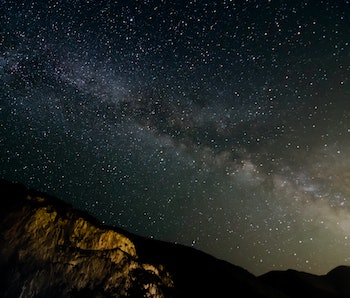 Right now, our galaxy is hurtling through space at about 1.24 million miles per hour. And one reason why is an expansive dead zone that’s literally pushing the Milky Way out. Let that sink in for a bit.

In a study published in Nature Astronomy Monday, researchers describe stumbling upon a large, low-density region in space largely void of galaxies called the Dipole Repeller that’s physically exerting force on the Milky Way and moving it.

“There’s a large under-dense region that’s pushing us away, that’s repelling us,” Yehuda Hoffman of the Hebrew University of Jerusalem, who led the research, tells Inverse.

Beforehand, scientists assumed that the Great Attractor, a region of galaxy clusters 150 million light-years away from the Milky Way, was pulling our galaxy towards it. Then, scientists started studying another region that may be pulling the Milky Way called the Shapley Concentration, which has about two dozen galaxy clusters and is 600 million light years beyond the Great Attractor.

The team used powerful telescopes, including the Hubble Space Telescope, to create a 3D map of the galaxy flow field and studied the speed of galaxies around the Milky Way. By doing this, they found our universe is both being pulled by very dense regions and pushed by not-so-dense ones.

“If you have a region that’s over-dense, it’s going to pull us slightly stronger than the rest of the universe,” Hoffman says. “If there’s another patch somewhere else in the universe, a patch that is under-dense, then its gravitational force will be weaker.”

It’s similar to hate and love, he says. The Shapley Concentration and Great Attractor are like love, pulling us in. The Dipole Repeller is like hate, repelling us.

Going forward researchers will continue to work on identifying the few mysterious galaxies within the void of the Dipole Repeller. This can point to more clues about the universe’s beginnings.