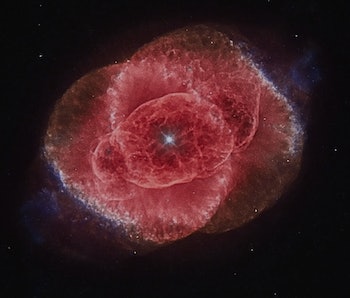 The blossoming rose of this distant nebula continues to awe astronomers as the star gives one last spectacular show before its death.

This image of the Cat’s Eye Nebula, NGC 6543, was taken by NASA’s Hubble Space Telescope and digitally enhanced by artist Raul Villaverde to show all of the activity bursting from the central star.

Scientists are still perplexed by the outer layers surrounding the dying star but theorize that they are produced by convulsions from the star. Like a pulsing heart, the immense energy is pushing out cosmic dust in waves creating a petal-like formation around the Cat’s Eye.

Another theory is that the center star might actually be a binary star system, in which two very close stars are dying simultaneously. Their orbits are still feeding off of each other and may even be gravitationally distorting each other’s atmospheres. This highly magnetized relationship is producing a giant cloud of combined star matter — mostly hydrogen and helium particles — encompassing all other stars and planets around it.

The Cat’s Eye sits in the constellation Draco within the Milky Way and is a thousand times the size of our solar system, spanning nearly half a light year across.

Scientists believe this is the phase our sun will be whirling toward in a matter of 5 billion years. Leaving Earth and the rest of our solar system in total disarray. The Cat’s Eye is a not-so-subtle reminder that life is fleeting and nothing in our universe is constant.