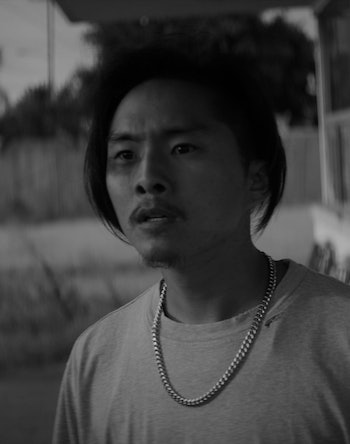 It’s impossible not to pause, take a beat, and put on a sober face before saying the title of Justin Chon’s new movie. And that awkward hesitation is exactly what the actor turned director was hoping for when he decided to call his debut feature Gook, a notorious racial slur for Koreans.

“I want people to say that because then people acknowledge in conversation that, yeah that is not a very good word,” Chon, himself a first-generation Korean-American, told Inverse during a conversation at Sundance. “I want people to feel of how uncomfortable it is for it to come out of your mouth.”

The movie focuses on two Korean-American brothers who work at their family’s shoe store and get caught up in L.A. riots that followed the Rodney King verdict. A young black girl often helps out at the store, which creates a conflict between her own family and the brothers that boils over in the midst of the riots. The movie reflects the tension that Chon experienced growing up — his father owned a shoe store in the predominantly African-American neighborhood of Compton — and dives into fraught relationships between two minority communities in an economically disadvantaged part of L..A.

Shot this summer, the film required significant crowdfunding to complete, in part because Chon — who co-starred in the Twilight series and features in Dr. Ken — and his producers couldn’t raise money from their own community.

“We’ve already gotten some backlash from the Korean community about the title, but that’s the point; I want them to get angry and wonder why it’s happening, so we can talk about it,” he said. “I tell people, I completely address it in the film. ‘Gook’ is a Korean word for country and Mi-gook means America, but it actually means ‘beautiful country.’ Why is that word used against us? I talk about it very thoroughly in the film.”

Chon, whose film earned rave reviews at Sundance, spoke with Inverse about the Korean-American community, his own experiences during the riots, Hollywood’s treatment of Asian artists, and more.

Your dad owned a shoe store, but how much else of Gook is based on real life?”

The background of it is true, but the story is completely fiction. My dad had a shoe store in East Compton/Paramount, and during the last day of the riots, we got looted. That part of it is factual, but that doesn’t happen in the movie. I felt a very big responsibility to tell the Korean side of what happened in the riots, but if you watch the film, it’s really not a Korean movie. Half of my cast is black and there’s Hispanics in the film so it’s definitely a very multicultural film. I’m not trying to vilify anybody. I try to treat every group fairly, and they all have reasons to feel the way they do.

But, this is really the only film that tells the Korean-American point of view of that event.

The Korean community was so affected. You know, it was really unfair how we were treated. They tried to blame [the riots] on us by saying we went into their communities and aggravated them by opening businesses and not assimilating and treating them poorly. Which to a certain extent is true, but that’s not what caused the riot. What caused the riots was the Rodney King verdict.

There were black businesses affected, too. I don’t want to negate that. There’s this one clip where this black electronics store owner is like, “What are you doing? What are you doing? You’re looting from your own people.” So it’s like let’s not negate the fact that everybody was affected. But Korean businesses were targeted and they were angry. Maybe a few people got some TVs and toilet paper and stuff but in the grand scheme of things, we all lost.

Yes, it was scary times. There was a lot of hatred going around. But as horrible as it sounds, it needed to happen because it’s like, from the black side, How long is this going to go on? You need to listen and that’s what happens if you’re treated unfairly for too long. And then for the Korean community, it was educational to reflect on why that happened, why the African-American community was so upset at them. There needed to be that sort of backlash so [Koreans] can actually start to become more a part of the community and respect [the black community].

Was it tough to convince people to give you money to make a movie with this title?

Yeah, and that’s where I was really — to be honest — very disappointed with my community. I was like, “Where are you guys? Where are you guys?” And now that we’re in Sundance, guess what? They’re all like, ‘You’re great! How do I invest in your next thing?’ Blah blah blah. But I’m like, that didn’t help me when I made this. It was really uplifting during the Kickstarter campaign; the power of crowdfunding is that they see the value and they support a show through money. We doubled our goal.

I truly feel with this film, with my community, that they need to give it a chance before they make judgments. They can make judgments actually, but just watch it and watch it all the way through. Because you know they’re going to watch the first ten minutes and not like it. They’re going to be like, ‘Why is this so raw and so in your face, and what’s up with all this swearing and cussing?’ You grow to love [the characters]. It’s a slow burn so you have to watch it all the way through.

The name. They don’t know anything about the movie and they just pre-judge. It’s old Korean men who are just calling into the newspapers. That’s also an audience that I’m like, Hey listen, it’s our time now. We’re the younger generation. We’re making media. Support us. Come watch this and see what we have to say instead of being the older generation that just judges and thinks they know what’s best. They don’t know what’s best for us anymore. We are here making the choice and making a difference in the workforce, you know making money and raising our families now. They need to acknowledge that. Especially Asians, they don’t want to hear that, but things have changed. You have to hear things you don’t want to, that are uncomfortable and don’t want to hear. I want the older generations to know that you need to support us because it’ll make things better for everyone.

Your dad plays a character like that in the film, Mr. Kim. Was he reluctant to be in the movie?

Oh yeah. He was an actor in Korea. He was like the child Macaulay Culkin of the ‘60s. It took me three or four months to convince him. He had all these stipulations. He was like, ‘No night shoots.’ I’m like, ‘What? Half the film is at night!’ He’s like, ‘I won’t go overtime.’ I’m like, ‘What are you? Brad Pitt? Okay, do I need to talk to your agent? What the hell’s going on right now?’ Then also, he wears a toupee. I was like, ‘You got to take that shit off.’ He’s like, ‘Why would I do the movie then?’ I’m like, ‘Because it’s real! You’re not going to support your own son?’ He did it and he specifically said, ‘Don’t ever ask me for anything else in my life again.’

Then he didn’t want to come to Sundance. I’m like, ‘Dude, this is a huge milestone in my life. You have to come.’ Then he came and he’s like, ‘Okay, I’m coming but don’t even think about calling me onstage. I’m not doing any interviews.’ After the response and clapping, after the credits, he walked up on his own. It was like, Okay, I thought you didn’t want to come onstage huh?

The Hollywood Reporter review said the film would find a home in the Korean-American market, and maybe more general audiences with the right distributor. Does that bother you?

I really want to challenge my own community, the Asian community, in its entirety. We don’t support artists enough. We don’t care enough. In 2017 now, it’s hard to get people out and supporting a cause so I really challenge and implore the Asian-American community and the Asian community as a whole because even in, say, Korea, they don’t care about what Korean Americans are doing. We need them to show that we have buying power and that we can make films with bigger budgets. It needs to start with our core audience first which is the Asian-American community and then show the rest of the world.

It seems like studios take the community for granted in a way; look at Doctor Strange, there was no hesitation to make the Ancient One a white woman instead of an Asian man.

And you know hey, I love Tilda Swinton, and I thought she was awesome in the film. It’s not her fault. She’s not the one writing the role and making the decisions, and if someone offered me a part that should have gone to an African American, am I going to turn it down if it’s a great role? I don’t know. But it’s like the [there can only be one] thing, Benedict Wong was amazing in it so seriously do we need two Asians? My thought is why not? But you know.

**There’s been more and more talk about diversity and representation in film and how hard that can be. Are you sick of that conversation? Do you want to just be seen for your work?

No, I welcomed this. I’ve just learned to embrace it. Look at me. I’m Asian. There’s no way around that, and if that’s what people want to talk about, I’m okay with it, because it’s part of my identity. You know, people get angry — other artists will get angry. Why can’t you just see me as an artist? As an actor? But no. It’s just I am what I am and if you want to talk about it let’s talk about it because there’s nothing bad that will come of it. I will educate so people can be more tolerant towards my ethnicity. If I didn’t want to talk about race relations, I shouldn’t have made this movie. That’d be really stupid for me if I were to get angry and be like, “I don’t want to talk about.” That’s what the film is about!