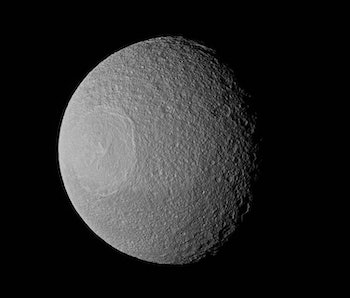 This dormant, eyeball-looking orb lurking in our solar system, is Tethys, one of Saturn’s many moons. NASA’s Cassini Spacecraft snagged this one of a kind image during a flyby in back in November 2016. Consisting mostly of ice and roughly 660 miles wide, Tethys is is actually one of the larger side of the family of moons that call the Saturnian orbit home.

Because of Tethys location in Saturn’s magnetosphere, it is both one of the brightest moons and the most bullied. It withstands contact with flying dust particles on a near daily basis. The result is a remarkably smooth and bright surface that results from a lifetime of being pummeled.

One wild trait for Tethys: Its biggest crater is named Odysseus and takes up nearly half the size of the planet. Although scientists are unsure what might have impacted with the moon, they believe it happened 4.5 million years ago, around the same time the solar system formed.

Another notable feature of Tethys is its valley called the Ithaca Chasma, which takes up about ten percent of the surface of the moon. It is believed that the valley was formed when the liquid on Tethys iced over, causing the moon to crack like a mug of hot tea in a freezer.

Tethys is part of the final phase of the Cassini’s 20 year-long mission to capture images and collect data of our solar system to understand how life forms. This last exploration around Saturn is the grand finale for Cassini. In just seven months, the probe will plunge into Saturn’s atmosphere and burn up, bidding farewell to two decades of groundbreaking research.