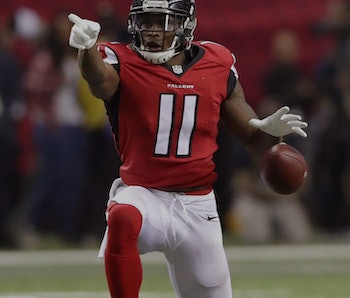 Ball sports invariably involve triangles. Soccer has the give-and-go. Basketball has the triangle offense. Baseball has the drag bunt. But football tops them all because each triangle creates a new triangle. Offense — specifically hurry-up offense — is a tesselation of right triangles. Quarterbacks describe triangles to their receivers and trace the hypotenuse of each with a spiral. Then more triangles come into play and viewers start saying things like “he should have had him” because they’re misunderstanding math and losing perspective.

Every middle school kid learns the Pythagorean theorem, which was created by the Greek mathematician Pythagoras to bother middle schoolers. The theorem is elegantly simple, proving that it is always possible to know the length of the third side of a right triangle give the lengths of the other two sides. You can probably almost hear that formula resound in your mind: “A squared plus B squared equals C squared.” It’s a beautifully concise, elegant formula that makes solving for the third side of a right triangle — given the other two — a simple exercise.

Sure, that makes for good, albeit basic, math. But the world rarely looks like graph paper. The exception to that rule is the football field, which is basically a long grid — the vertical lines aren’t drawn, but they seem real to offensive coordinators and wide receivers.

In a typical play, a quarterback will edge back after receiving the ball, then fling the football at an angle to a receiver, who — at risk of losing millions during his next contract extension negotiation — catches it. A triangle is complete. But that’s just the first of two triangles because at the moment a wideout catches a pass on a go route he finds himself standing at the right angle of another trial. In front of him, there is the line stretching toward the end zone. Next to him — most likely — is a defender who must angle to intercept him. If his name is Julio Jones, that won’t happen. But if it isn’t, the defender will have a chance if he chooses the correct “angle of pursuit.”

In other words, good cornerbacks become great cornerbacks by racing down a hypotenuse at a hastily calculated angle (or learning to prevent completions in the first place). Think of the players as two vectors: One move at an angle, the other straight ahead. The two players, in other words, are living out Pythagoras’s theorem.

This explains why defenders often seem like they’re going to catch receivers in the flat then fail. Football is generally shot from the side and players are often wildly different sizes. Receivers are — with notable exceptions on the Patriots — generally fairly tall. Cornerbacks are — with few notable exceptions — very fast. But defenders almost always have further to run. Shot from the side, they look like they’re closing in, but they’re trying to run a longer race in less time. If, for instance, a defender is 30 yards away from an offensive receiver and 40 yards away from the end zone, then the Pythagorean Theorem tells us that he must run 50 yards in the same time as the receiver runs 40 yards to catch him at the edge of the end zone, which won’t do a damn bit of good anyway. In reality, he has to run 45 yards faster than the receiver can run 38, knowing that it’s going to take a bit to bring the big guy down.

Want to know why defenders who make those kinds of plays get so much hype? Just consult Pythagoras. It’s a hard play — one that requires calculation, explosive speed, and efficient tackling. And that’s the best case scenario; most receivers can do more than run in a straight line.

More like this
Science
6.26.2022 10:00 AM
In the search for dark matter, an unexpected tool may give scientists hope
By Antonis Antoniou and The Conversation
Science
10 hours ago
JWST will unlock the mysteries of these 7 peculiar exoplanets
By Jennifer Walter
Science
10 hours ago
NASA’s CAPSTONE Mission Is On Its Way to the Moon
By Kiona Smith
Related Tags
Share: