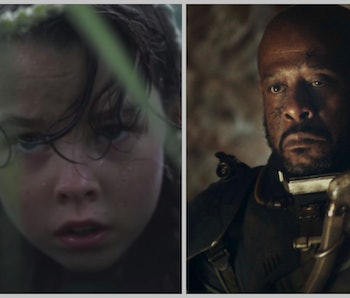 After young Jyn Erso was rescued by Saw Gerrera, he told the child they had a “long ride” ahead of them. Now, a new YA novel will fill in what happened in-between that exact moment and Jyn’s adult imprisonment in an Imperial labor camp in Rogue One.

Written by Beth Revis, the beginning of the forthcoming Star Wars book will pick up exactly when Saw finds Jyn in her secret hiding place on the planet Lah’mu. On Wednesday, /Film noticed newly released pages from the book showing Jyn and Saw heading to a sanctuary on the watery planet of Wrea, located in an asteroid-heavy part of the galaxy called “Smuggler’s Run.” This phrase was first mentioned in a Han Solo and Chewbacca adventures called Smuggler’s Run, released as a similar YA Star Wars novel in 2015. It’s unclear if this “Smuggler’s Run,” is the the same “Smuggler’s Run” from the Han and Chewie book, but it seems likely that’s the case.

Because the book seemingly takes place inside of Rogue One: A Star Wars Story, the story is bound to be even more continuity-heavy than the Rogue One prequel novel, Catalyst. While Catalyst filled in the gaps between the prequels and Rogue One, this will help explain the character relationships which were pretty much exclusive to that film. In the movie when Jyn says, “You left me in a bunker with a blaster,” readers will now get to see what the scene actually meant.

Star Wars: Rebel Rising will be published by Disney Books sometime this year.