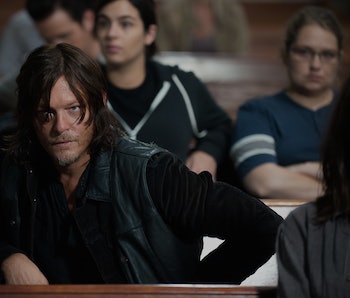 Daryl Dixon’s looking for blood after being stripped of his dignity (and his clothes) in the first half of Season 7 of The Walking Dead. Now that he’s back with his crew at the Alexandria Safe Zone, actor Norman Reedus says the character is jonesing for revenge. But will he find it?

“He’s ready to fight,” Reedus says. “When he goes back in that last episode and hands Rick back his stuff, it was like, ‘Let’s go! Let’s go beat this guy up. Let’s go take what’s ours and fight this monster.’ So, you know, he’s in kill mode.”

Daryl may be ready to go, but that doesn’t mean the time for revenge is coming anytime soon. A good chunk of TWD’s Season 7B will involve Rick gathering allies to create an army to take on Negan’s Saviors and end things at the Sanctuary. And while the show’s ratings could use the boost that an all-out war between the Saviors and Alexandria and its potential allies would undoubtedly bring, there’s a chance the action won’t come to a head until Season 8.

“I think you’re going to start to see a little fear in that bad guy’s eyes,” Reedus said, fully in character when asked about Negan. “He’s been walking tall long enough wielding his little toy bat around. Time to bring that guy down a notch.”

The Walking Dead’s official Twitter account tweeted out a 15-second teaser trailer on January 22 with: “Join us in fighting for freedom. #TWD returns February 12.” The trailer more of a blip than anything telling is a short plea from Rick for some mysterious second party to “join us” in the fight against Negan and the Saviors. It’s easy to assume that Rick is speaking to either Ezekiel, king of the Kingdom, Gregory, leader of the Hilltop Colony, or Natania, head of the Oceanside group.

If TWD follows the plot of Robert Kirkman’s graphic novel series of the same name, then Rick and his army will come out the other end of the war as the winners. Negan will live despite having his neck gashed and being taken prisoner. But there’s still no word on whether or not there will even be a showdown this season that could end in Negan’s capture (or death).