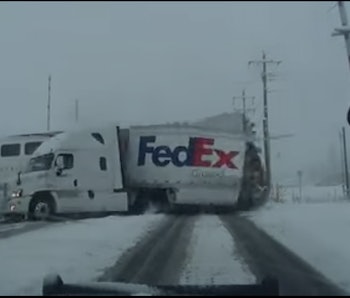 Driving in the snow has to be a rough gig for a FedEx driver, but a trucker in North Salt Lake City on Saturday had bigger problems, like the massive Frontrunner train that blew through a malfunctioning railroad crossing and obliterated the entire back end of his truck.

According to the Salt Lake City Tribune, there were no serious injuries in the crash (except a few hundred totally screwed packages), but FedEx is definitely going to need a new truck. The Utah Transit Authority is trying to figure out why the crash happened, as the dramatic dashcam footage released today clearly shows that the railroad’s crossing lights and barriers were not functioning when the train blew through the truck.

The UTA’s news release says that the gates had defaulted to a closed position because of heavy ice and snow, but that status was somehow reversed after an employee showed up later in the day, and the gates remained up.

The crash video is sudden, striking, and would probably make Ned Flanders say “golly” in his most shocked tone of voice.

“The agency has never had an accident like this before, and UTA is investigating why and how it happened to ensure it doesn’t occur again,” the UTA press release says, which is probably true, as trains crashing through massive semi trucks doesn’t seem like it happens every day (even though YouTube has a flourishing category).