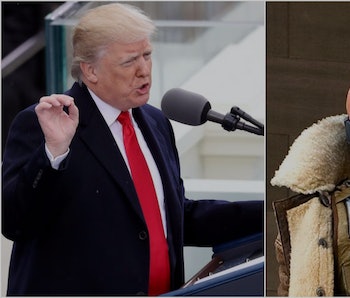 When Donald Trump took the stage at his inauguration to deliver his speech, there was a moment that took people by surprise, and not in a good way. It was the moment he echoed the Batman villain Bane directly in his Inaugural Address. In an interview with The Hollywood Reporter, the two comic book creators of Bane weighed in on the comparison and congratulated the new President.

On January 20, 2017, Donald Trump was inaugurated as the 45th President of the United States. During his address, he promised to give the country back to “you, the people.” A promise that the villain Bane gave to the people of Gotham when he took the city hostage with the threat of nuclear weapons in Christopher Nolan’s The Dark Knight Rises.

Writer Chuck Dixon and artist Graham Nolan, who are credited as co-creators of Bane alongside writer Doug Moench during the infamous Knightfall arc where Bane broke Batman’s back, found the comparisons to be partially accurate.

“Is [Trump] like a Batman villain? In many ways he is. But our last guy in that office often reminded me of a Bond villain. So there you go,” Dixon told The Hollywood Reporter.

A noted conservative, Dixon told Inverse in 2016 that he felt progressive comics were only about sales while promoting his independent, Anti-Clinton comic book.

While Dixon has been a Trump supporter since his first debate appearance, Nolan is willing to give the new President “the benefit of the doubt,” noting that he has been a lifelong Republican who supported Ted Cruz in the New York Primary.

It’s worth noting that when asked about what a Bane Presidency would look like, the two creators focused more on Bane’s self-aggrandizement and brute strength, rather than his status as an immigrant, or his tactical savvy. “Brutal,” Dixon describes a President Bane. “The guy likes being the top of the heap and he likes staying there. He’d be an all-term president and probably serve as vice president and most of the cabinet, too.”