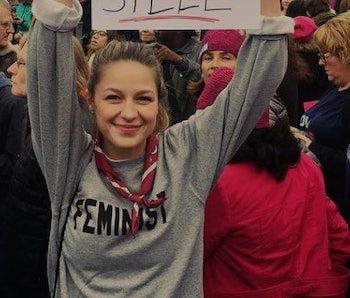 Heroes and supervillains alike gathered with the masses on January 21 to protest the inauguration of President Donald Trump and stand up for women’s rights during the Women’s March on Washington. The world joined in on the movement, and the IRL counterparts to some of the world’s biggest superheroes marched to show their support.

Their signs and social media posts were as varied as the actors and crew members themselves, so rounding up some of the best-known ones in one convenient place seemed like a good idea. From Supergirl/Kara Danvers actor Melissa Benoist’s “feminist” sweatshirt to Mark Ruffalo (The Hulk) and his “99 problems and this bitch is one” sign, here are some of the best superheroes carrying their day jobs into real life.

Wow, not only did Supergirl show up, she made an in-character pussy joke.

Magneto and Gandalf were there.

Mark Ruffalo was perhaps the most vocal member of the MCU against electing President Donald Trump.

No surprise, most of the Berlantiverse was there.

Could anyone watch Jessica Jones and not expect her to show up?

If you’re wondering about the politics of the Power Rangers, check out what the comic is doing.

The overwhelming support from the superhero (and villain) community at large is not only heartwarming, but it’s encouraging. Maybe it’s proof that the world is on the right track, especially if Supergirl is in on it.