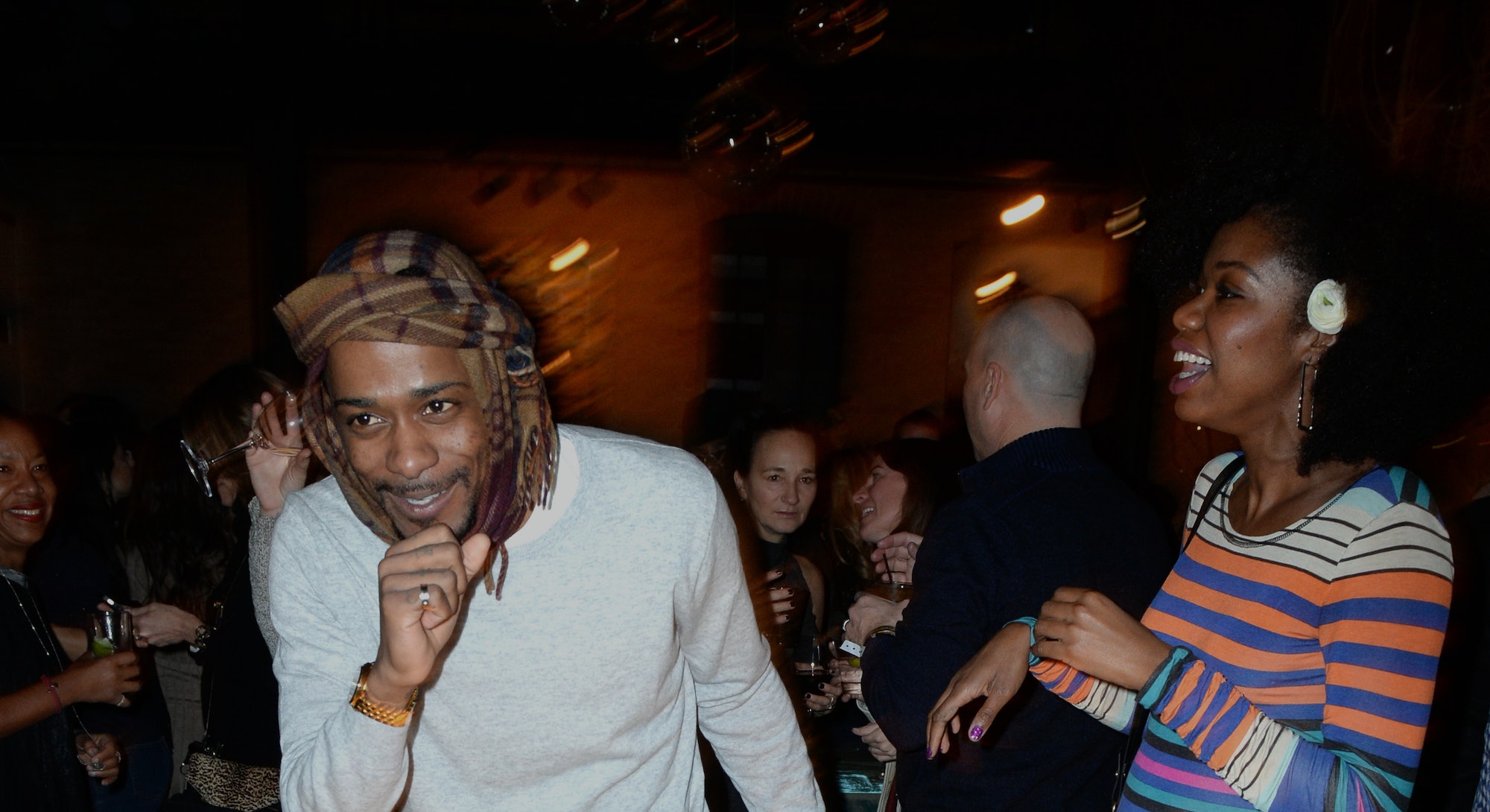 Keith Stanfield likes to say that he takes nothing for granted, and though that’s a cliche that a lot of famous people employ in interviews, you get the sense that the 25-year-old actor and rapper actually means it. When Stanfield bounces into the room, he literally stops to smell the flowers arranged on table, plucking one from the bouquet and twirling it beneath his nose for the first few minutes of our conversation.

He’s got a lot to celebrate: After working a series of odd jobs in his early 20s, Stanfield has quickly ascended the ladder to stardom. His breakout role came as a troubled foster child in 2013’s Short Term 12, and he gained a national audience this past summer as Darius, the oddball philosopher and scene-stealer in the FX comedy Atlanta. He’s at the Sundance Film Festival with two films, including Crown Heights, a dramatic true story about a Brooklyn man named Colin Warner who spent over 20 years in jail for a murder he didnt commit, and it’s a role that both changed his career and outlook on life.

Director Matt Ruskin’s Crown Heights provided Stanfield’s first opportunity to play the leading man, which makes the film particularly meaningful to him, especially given the film industry’s proclivity for superheroes and blockbuster films. “I’m glad that it can be about a guy I respect, and not ‘Captain Stupid Motherfucker’,” he says, posing like Superman and laughing.

He can laugh now, but there wasn’t a whole lot of levity during the Crown Heights production, the bulk of which he spent in prisons on set and of his own mind. Stanfield spoke with Inverse about the intensity of making that film, the nightmares that came with it, and his unexpected contributions to Atlanta.

How did you prep for the responsibilities of being a leading man?

I hung out with Colin in Georgia for a series of weeks, to just get his vibe. I didn’t take really anything from him. I didn’t want to take all his mannerisms, because I didn’t think that was important. All I had to do was have his general core in my body. But I did want to pay homage to where he came from. He sat me down in this shrine in his house, and his wife came out — she was his backbone and kept him strong through the process — they introduced me to this little corner in the house. They pray there. There’s a part in the movie where she says to him, “Just breathe,” and that’s a real thing that she guided him through. This guy wasn’t just grounded because he was grounded. He had things he believed in and had faith in things that were bigger than him. I thought that was very important.

He was a kid when this happened, 20 years old. You’d think he’d be so angry, and he’d have the right to be, and yet he wasn’t at the end. What’d he tell you about that?

He put it like he did at the press conference after he left prison. Which was, “I’m not mad at anybody.” When you have that much time you come to accept certain things about life and reality. Unfortunately, he had to do it in that way, but I think he just came to understand that some things are out of your control and this is my path. Some people have different paths. Some people have it great, are born billionaires. Some people are born with nothing. And some people aren’t even born. So everything else is in between, and this happens to be my lot in life. And I think that’s a very mature and courageous stance to take. Part of that stance is the way that I feel about life. You wind up in situations, there you are, don’t complain, handle it, get it done. So I respected that about him, and that was something that I already believe as well.

Do you continue to stay in character throughout the duration of the production, as you did on Short Term 12?

To an extent. Because I don’t think it’s worth sacrificing parts of yourself to pull off a role. It is to a certain extent, but you’ve got to kind of taper it, do it to an extent where you’re not killing yourself. I’ve had dreams reoccurring because of this role where I’m being pursued by law enforcement, and I don’t really like that shit. My trailer was a cell and I was just staying in there the whole time, really feeling the trap, especially for the solitary confinement scenes. I really want to be in there, and I wish they had put more of that in the film, because it was real traumatic.

Your trailer was like the cell for solitary, and you stayed in there to get into that headspace?

I kept repeating to myself, “It’s so unfair. It’s unfair. There’s nothing more unfair than your best friend getting killed by his brother.” That happened to me, and I remember just saying that mantra to myself during that time. It made me angry, it made me sad. I was shocked. Unfair was the main thing I remember. Why fucking me? That’s how Colin felt: “Why me? What do I do, God?” So I kept that energy throughout, and I think people might have thought I was crazy on the set because I kept saying “Why, why, why?” But I was trying to figure out, why am I trapped?

When you were doing the original Short Term 12 short, which was your first role, did you expect to be here just a few years later?

No, no, no. Part of that is because of that belief process. No expectations. Life is just a ride, you gotta make sure you have fun, and try to do the best you can. Thats pretty much what I live by.

So talking with Colin reinforced that?

Yes, and it can’t be reiterated enough. And that’s why I really like this story, because it’ll be good for a lot of people who are going through things. It’s good to keep things in perspective, because we think, “Oh, my life is hard” … but this guy was in prison for murder. So it’s really good for people to look at the larger perspective of things and remember to continue to push through life.

And then things change — you’ve got two movies here and Atlanta just won a Golden Globe.

That’s why I don’t really get caught in my head about it. Two reasons: I know nothing’s promised, and I know this is fickle, and I know what this is. Sometimes it’s a wave and you go right back to the shit you were doing before. So I never get caught up. Also, I’m grateful for it, because I haven’t always had it, and it’s a beautiful thing for it to come forth at this time, and I just give it all back to God or the ethers or whatever you want to call it. Because it’s not for me to hold on to. I appreciate it and love it, but I don’t hold onto it.

One episode of Atlanta that stuck out to me saw you going to a gun range and bringing a target with a picture of a dog to shoot at. And people flipped out, but they were shooting pictures of humans.

That’s what I love about Darius. He always seems to be acutely aware of shit and phrases it in a way — I feel like I’m dense in some ways. I’m always aware of shit, but I seem stupid. Those characters go together. It’s like a weird, interesting thing, and I really enjoy that about him. That was a really fun scene to shoot. I got to walk around a gun range. I actually shot that day, and I realized I actually got some pretty good aim, much better than my friend who was there. We shoot not only at human targets, but there at that gun range, they actually have targets that were dressed up like Osama bin Laden. It’s crazy shit that they actually shouldn’t do. But no one would ever shoot at a dog target. People would look at you like that’s crazy.

Do you have much involvement in the writing?

You know what I think happens? I think the writers follow me. Because when we were in Atlanta, I’d be in clubs, getting the lay of the land, I’ll pop up and see a writer in the corner and say, “What the hell are you doing here?” And he’d say, “Oh I’m just chilling, man,” but he’s not drinking or doing anything. And I’m like, “Oh, I see what you guys are doing. These guys were scoping things, taking real-life events and putting it into the story. Because in the scene where we’re in the club, and my character gets up and randomly starts dancing, I did that in a club like two weeks prior. I was the only person dancing, and they put that shit in. I said, “You guys are pretty smart,” and a lot of stuff like that happens. But really the bones of the character, that’s straight out of [show creator Donald Glover]’s mind. That is his invention, and I just happened to fit it.