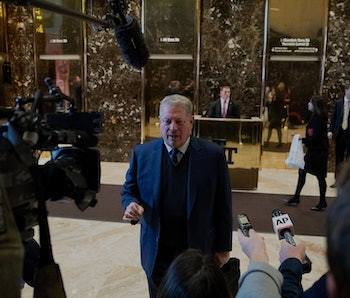 An Inconvenient Sequel: Truth to Power, the follow-up to Al Gore’s seminal climate change documentary, fits firmly in two very disparate genres: It’s both an inspiring look at a man devoted to a selfless cause… and a bone-chilling horror film. And because it premiered at the Sundance Film Festival on Thursday evening, just hours before Donald Trump was to be sworn in as President of the United States, it was impossible to leave the theater not feeling the sort of existential dread that the best horror films evoke.

Up until November, directors Bonni Cohen and Jon Shenk must have thought that they had captured a feel-good story about how the former vice president helped pull the world from the brink of suicide. The film tracks Gore’s tireless efforts to make climate change an international priority: The Nobel Prize-winner battles senators who think global warming is a hoax, trains thousands of volunteers to spread the word in communities across the globe, and visits sites around the world devastated by increasingly extreme weather. He’s got every major world leader on speed dial, and ultimately proves to be crucial in brokering the historic Paris Agreement in late 2015, which saw nearly 200 nations agree to drastically lower their carbon emissions.

It should be a valedictory moment for Gore, who spent three often-lonely decades trying to raise awareness for what was once seen as a fringe hippie issue. But like in all good horror movies, there are little hints of looming danger that finally lead to a devastating end.

One sequence about 40 minutes into the film is particularly alarming. It starts with Gore telling some followers that the fossil fuel industry has spent years trying to convince (and bribe) politicians into ignoring climate change. That’s not news, but the next two scenes are particularly painful now. First, Trump makes an appearance on Fox News, admonishing President Obama for focusing on global warming instead of defeating ISIS. Then, New York Attorney General Eric Schneiderman meets with Gore to discuss his investigation into Exxon-Mobil and its allegedly fraudulent representation of climate change science going back to the 1970s.

Gore overcomes these obstacles in the movie, but here in the real world, they’re back with a vengeance. Trump is hours away from taking power at the White House, and his pick for secretary of state is none other than Exxon Mobil CEO Rex Tillerson. Both President Obama and Secretary of State John Kerry are featured prominently during the film’s final act, as they help broker the Paris Agreement, and it’s just about impossible to imagine their successors doing the same thing.

In fact, Trump has promised to pull out of the Paris deal. And that promise looms large when watching Gore tour flooded streets in Miami, melted glaciers in the arctic, and islands devastated by super-storms. Instead of just surveying carnage from past catastrophes, it’s as if he’s just giving us a little preview of what might be in store in the years to come, should Trump follow through on that promise. And it’s not just Trump that is the antagonist here. At one point in the movie, Gore preps to appear on MSNBC, and discusses the plan for the discussion with host Chris Hayes. The former vice president has to beg Hayes over and over to promise that they’ll discuss climate change; Hayes, a liberal cable news golden boy, really wants to talk about the horse race of the 2016 election. And you wonder how Trump won.

The movie works hard to stoke optimism, despite the fact that it ends with Gore making a visit to Trump Tower. The filmmakers want you to take solace in the fact that other countries are hard at work tackling the crisis. Here’s some good news: Solar panels are becoming more affordable and being installed in record numbers, including in developing nations like Chile. And hey, maybe you can find hope in the Paris speeches from Russia’s Vladimir Putin and China’s Xi Jinping, two leaders from countries that had not been particularly concerned with reducing carbon footprints.

Gore also projected optimism during his post-screening chat with the audience. “This movie gives me an extra burst of hope because I think it really effectively tells the story of how much hope is out there for transforming our energy system to become much more efficient, he said. And as he pointed out in his talk, the film does look at several small cities in America that are getting all of their energy from renewable resources. Whereas he was once waging a lonely battle against climate change, he’s now leading a worldwide movement.

Still, it’s impossible to not feel gloomy about the future of the world at this very moment, and even Gore noted that dark times may be ahead given the politics of the new administration. On the bright side, a landmark deal like the Paris Agreement was a pipe dream when the first Inconvenient Truth came out a decade ago, and this new film shows that with enough effort, people can be rallied to do the right thing. But let’s just hope another sequel won’t be necessary by the time the film hits theaters this summer.